Kiefer Sutherland loves being a grandfather 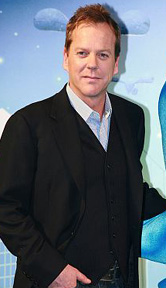 At the ripe old age of 42, Keifer Sutherland is a doting grandfather. Well, technically, step-grandad, because his grandson is the son of his stepdaughter Michelle Kath. Her mother, Camelia Kath, was Sutherland’s first wife (they were married for two years), with whom he also has a biological daughter. He told The Mirror that spending time with his grandson is “one of the great pleasures of my life. His name is Hamish Adam Kiefer Sinclair, he’s four-and-a-half and he’s a train wreck,” he said. “He already looks like a failed boxer. He falls down a lot and he gets cut up and he’s just beautiful.”