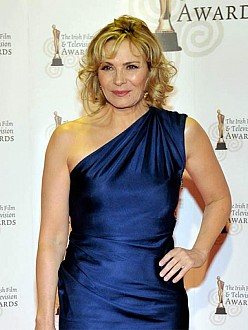 The 58-year-old actress admits she doesn’t understand the appeal of the Fifty Shades of Grey hunk because she thinks he looks like a ”young boy.”

The Sex and the City star admitted she has no desire to see him in the raunchy movie because she finds him so unappealing.

She said: ”I saw the preview and you know they say in three seconds you can tell if you find someone attractive or not? Well, I just thought, ‘no.”’

Instead, Kim admitted to having a crush on 59-year-old actor Brendan Gleeson, who she previously appeared with in theatre production The Tiger’s Tail.

She laughed to Ireland’s Independent newspaper: ”Now, if he were Brendan Gleeson—well, there’s a little something going on there, you know, the twinkle in the eye…”

Kim is best known for playing Samantha Jones in Sex and the City and she admits she is sad there are no plans for new TV shows or spin-off movies.

She said: ”Well, Sam is behind me in the sense that it’s over. And whatever speculation there is, there is no script on my desk or anyone else’s right now. I miss it sometimes. I feel very nostalgic for it and the excitement for it.”