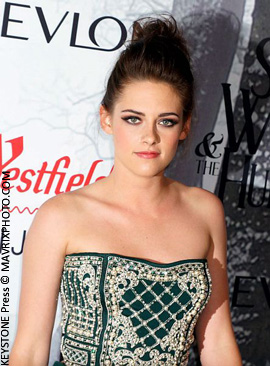 Forbes has released their list of highest-paid actresses and Kristen Stewart tops this list with an impressive $34.5 million in earnings this past year. Considering the immense success of the Twilight franchise, it should come as no surprise to see Stewart’s name at the top. As Forbes explains it, once a franchise really takes off, “the star becomes indispensable and the studio has to pay up… that’s why Kristen Stewart has vaulted to the top of our annual list of the highest-paid actresses in Hollywood.” Bad Teacher actress Cameron Diaz comes in at number 2 on the list with $34 million and Sandra Bullock, Angelina Jolie, and Charlize Theron follow behind in that order as numbers 3 to 5. Despite the women’s high earnings, Forbes notes that they still fall far behind the male actors in terms of earnings: “The 10 women who make up our list earned a total $200 million compared to the $361 million brought in by our top 10 men.” ~Stacy Raivich