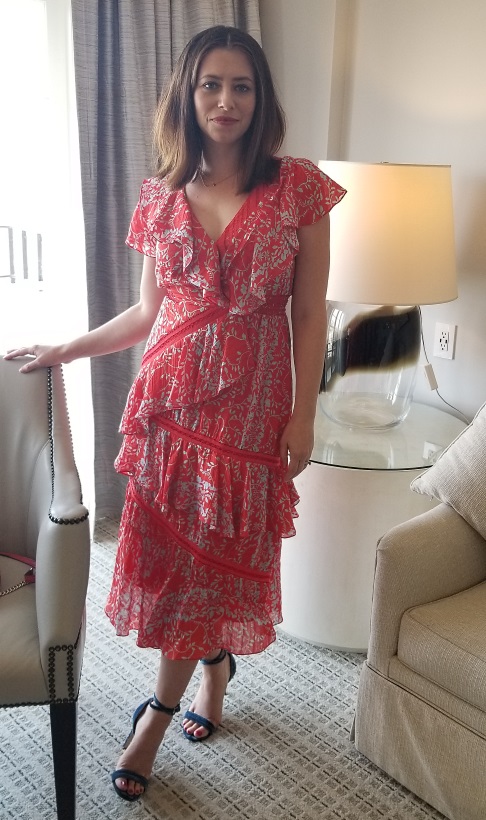 Lauren Miller Rogen is excited to be making her directorial debut with Like Father, a Netflix original film that she also penned.

The film stars Kristen Bell as Rachel, a workaholic woman who is left at the altar. Showing up for the wedding unannounced is her father Harry (Kelsey Grammer), whom she hasn’t seen since she was five. They go for drinks and she wakes up to find herself on her Caribbean honeymoon cruise accompanied by her dad. The film also stars Lauren’s husband, Seth Rogen.

At the Four Seasons hotel in Los Angeles, I sat down with Lauren to discuss her feature film, Seth’s role in it, her go-to places when she wants to relax and who would be the last person she’d go on a cruise trip with. ~Marriska Fernandes

Where did the inspiration for this story come from?
The original idea came from Anders Bard, who is one of the producers of the movie. He pitched the idea of a woman who gets left at the altar and her dad, who she hasn’t seen since she was a little girl, shows up and they go on her honeymoon cruise. It was just a kernel of an idea and obviously I was not left at the altar and I do have a fabulous dad. But I really sparked to the idea of creating a character who goes on an emotional journey like that and for me that was the original instinct to be like, “Oh I want to write this. It seems fascinating to take a character on such a wild ride.”

Can you talk about your experience writing it?
It took me close to two years. I was going through an emotional time in my life when I wrote it. My mom, who has Alzheimer’s, had gone to the next stage of becoming much more advanced. I was just in that place of fighting against that reality and really angry, had a hard time focusing and I think that it sort of ended up bleeding through into the story of this woman who thought her life was one way and worked so hard to create this thing. But that’s not what she needed, that’s not her reality and she needed to take a pause and take a deep dive into who she is and focus on who she needed to be. 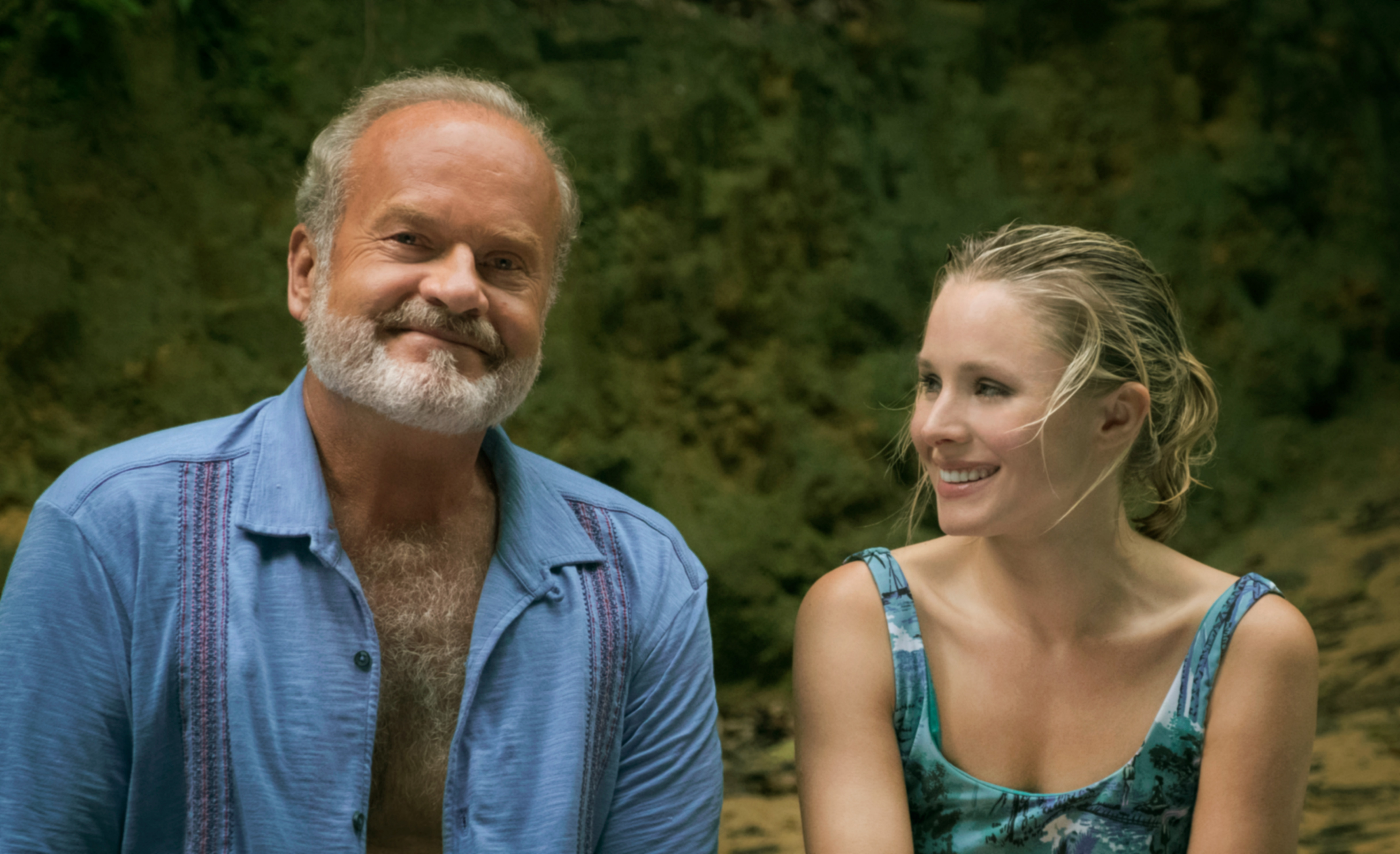 The story is so relatable – did you identify with any of the characters?
Honestly, I think I put bits of myself into all of them. Rachel loves her job, is focused, she has a lot of anger, which I have, and she’s the kind of woman who says, “I’m okay, I’m okay” and that’s very me, I’ll say “I’m okay” even when I’m not okay. It was very important for me to make Harry a human being. I didn’t want him to be a villain. I wanted him to be a person who made a mistake, who chose himself, which people do, which is human and fair. Obviously, I’m not a dad and I’ve not left a child, but I’m a human being who’s made mistakes that I shouldn’t have made and have learned from them and I put that in there. I say that my life has high highs and low lows and that crept into the movie as a whole.

I definitely didn’t see Harry as a villain, and his story is so relatable.
Yeah! And Kelsey is just the most likable person. I don’t know if you’re talking to him today.

This film marks your directorial debut. Had you been thinking about directing for a while, or you decided to do this after you wrote this script?
I went to film school so the intention was always to do this. However, I think I didn’t have the confidence early. When I graduated from school I wasn’t like, “I’m going to be a director.” I was an assistant for a few years and felt like I needed to pay my dues to learn and figure this all out. My first movie I did not direct because I wanted to act and felt I couldn’t do both at the same time, which now I totally could. But this, when we started writing, no, I wasn’t going to direct it. Then we sent it to a few female directors I admired and two of them wrote back and said, “Why are you sending this to me? You should direct it.” So then Anders was like, “You should direct it.” I said, “Yes, I should.” From that moment I was like, “I’m the director, I’m the director. I need to own who I am.” That is so who I am.

You mentioned you admired female directors. Can you name a few?
Barbra Streisand is my number one all-time idol. I invited her to my bat mitzvah. She’s been one of the groundbreaking female directors and I always look up to her. Growing up, of course there was Nora Ephron, Penny Marshall… they were unbelievable. Nicole Holofcener is someone I’ve admired since school and being introduced to her work. I think she creates such real women… I could just watch her movies all day. Sarah Polley, I wish she would make another movie. I think she’s so talented. There are so many. I could go on.

So for Seth, did you write the role for him?
No, not at all actually. He was never going to be in the movie. At one point, maybe four months away from the movie, we were like, “It would be funny if you played Owen.” I liked the idea of having someone who’d only be there in the first scene. We were like, “This will be good. People will be think you’re the love interest.” And literally we were like six weeks from shooting and I had been reading guys for Jeff, who I had written as a mid-Western guy. Sweet and dorky, a mid-western dude. We were in Vancouver and when I’m in Canada, I’m very aware of Canadian things. As an American, I would joke about it with love. So I was like, “Wouldn’t it be funny if Jeff were actually Canadian.” He literally went, “I’m not going on the cruise ship.” I was like, “No, it’s not what I’m saying.” (laughs) But then over the next few days I kept being like, “Oh, what if Jeff said this and that..” He was like, “Uh, yeah, it would be really funny. I have to do it.” (laughs) We just created this character that he couldn’t really say no to. A few people have pointed it out when he says he’s never smoked anything in his life, but that was in the script way before!

I noticed that. It was hilarious!
Honestly, that was in there and until we shot that scene, when we were in Jamaica and he was about to say that line, I was like, “Oh… this is now going to be a joke!” It wasn’t written as a joke, it was sincere and it became a joke.

That line where he introduces himself as being from Edmonton, Alberta, Canada. Do we Canadians do that?
Yes, they do. You didn’t, but they do! (laughs)

What kind of advice did you get from Seth as a fellow director?
Honestly, when I made For a Good Time, Call…, he told me, which is the best advice I’ve gotten, that my first job above all is to be happy to be there. And to be in a good mood. We work so hard to get to production and to be the lead actor, co-star, or to be the director. If you’re not happy to be there, then no one else if going to want to be there either. It’s hard. We have long hours and sometimes it’s hot or uncomfortable and gross. Sometimes you’re on a cruise ship and it’s great, and sometimes it’s not. So my best advice was it’s my first job to be in a good mood.

How did Netflix serve as a platform for you as a filmmaker?
They’re so supportive, it’s crazy. I was always like, “You’re going to say yes to this and this? You have no notes for this? Great! Thank you!” When they did have notes, they would be like, “These are our ideas. Let’s talk about it.” Nothing was ever, “You can’t do this. You have to do this.” I was very fortunate for my first feature. Very fortunate.

What are you currently binging on Netflix?
Peaky Blinders. But I watch it with subtitles because it’s a little confusing. They have real thick English accents. We watched the first episode and were like, “Meh,” and then with subtitles we were so in!

In order to bond with her father Rachel has to detach from her phone and do a whole lot of soul-searching. What’s your go-to when you need to do some soul-searching?
Hmm… good one! I’m a big put-my-phone-down person. So that’s not even a question. I love to be like, “Phone? I don’t have one right now.” But for me, I just like to shut off. We have a house at the beach and we just sort of go and clear our minds because we are storytellers, so we’ll get into mindless TV and Million Dollar Listing, Somebody Feed Phil on Netflix right now. Happy, light stuff is my relaxation.

Who is the last person you’d go on a cruise trip with?
Is it supposed to be someone I’ll warm up to at the end or… (laughs)

Possibly, yeah!
Well, honestly, when I was writing, someone said, “You should go on a cruise trip with your dad for research.” My instinct was like, “I don’t want to go on a cruise with my dad! I don’t want to be trapped with him for a few days.” So can I say my dad? But only knowing that in the end I’d be like, “That was amazing!” Because I know that’s how it would go.

Aww, that’s sweet. Thanks so much for the chat!
Thank you! 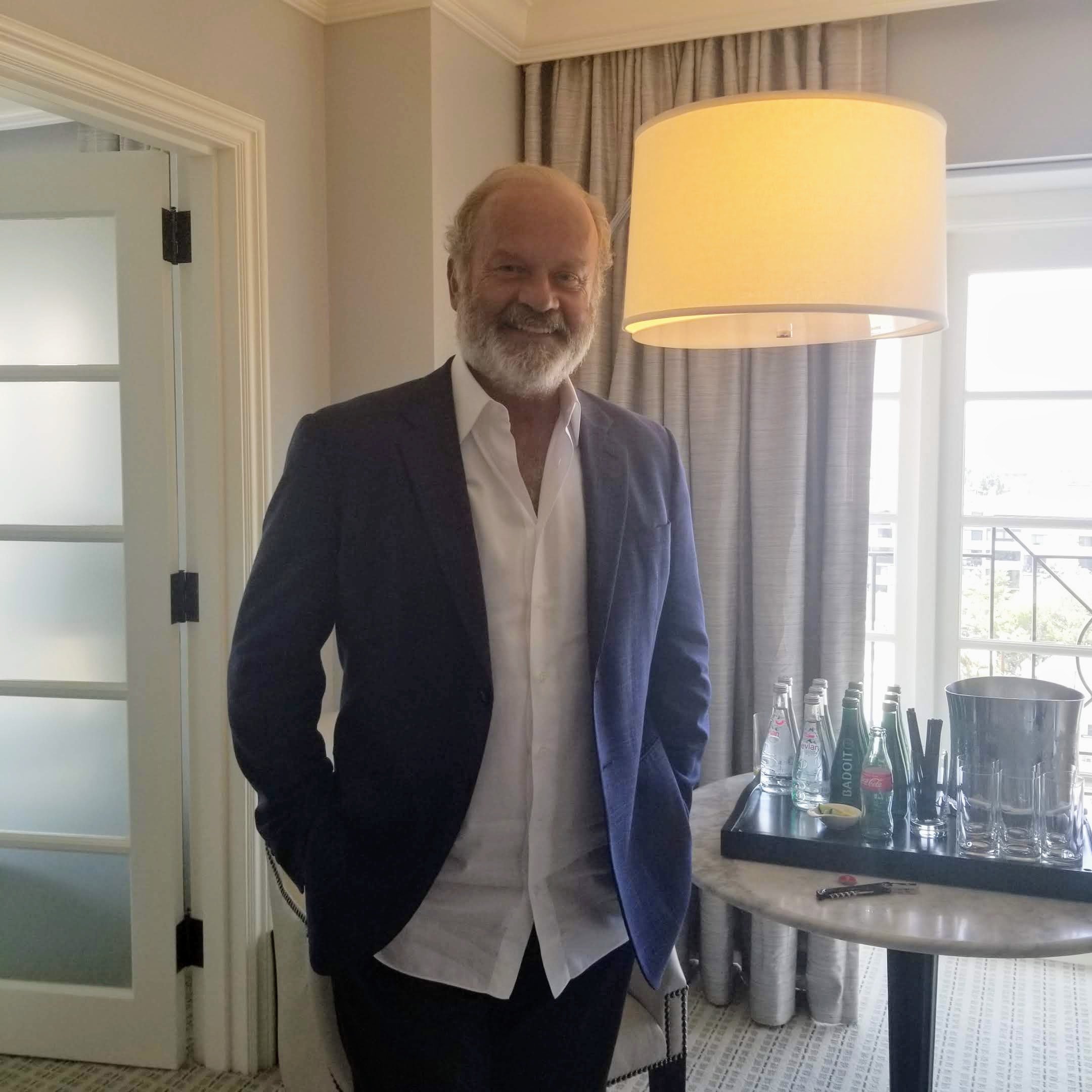 Netflix’s Like Father: Kelsey Grammer on fatherhood and more

We sat down with Kelsey Grammer at the Four Seasons hotel in Los Angeles, to discuss the Netflix film Like Father and how fatherhood influenced his on-screen role.