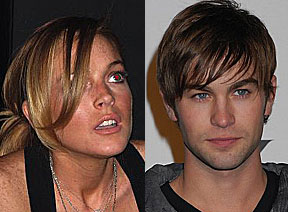 Lindsay Lohan apparently has a crush on Gossip Girl star Chace Crawford. Although she’s linked to Samantha Ronson, British newspaper Daily Mirror reports that Lohan met Crawford at a party in NYC and spent the night “throwing herself at him.” A source said: “Lindsay took a real shine to Chace. She was standing in such a way that some part of her body was always touching him — at one point hip to hip. She was giving him the filthiest looks, whispering in his ear, and turning everything he said into an innuendo.” The two exchanged phone numbers and according to the source his cast members have been teasing him because: “Lindsay has been calling him three or four times a day and sending provocative text messages.”