Luke Hemsworth signed to The Reckoning 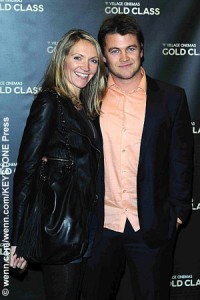 Luke Hemsworth. Does the name sound familiar? That’s because he’s the older brother of Australian hotties Chris and Liam Hemsworth. Luke, 32, will be making his Hollywood debut in an indie crime thriller directed by John V. Soto, The Reckoning. He’ll play the role of a detective searching for missing teenagers who accidently shot video footage of a murder. Luke was a successful actor in Australia before his siblings set foot in the entertainment business. He starred in the Aussie soap opera Neighbours and also appeared on other television shows such as The Saddle Club, Last Man Standing and Blue Heelers. He took a break from acting to help with his family’s flooring business and to focus on his two kids. Seeing the success of his kid brothers — Chris starred in Thor and Liam played roles in The Hunger Games and The Expendables 2 — made him want to take another stab at acting. Luke is also set to shoot a World War I film The 34th Battalion, which will be released later this year. ~E. Guevarra