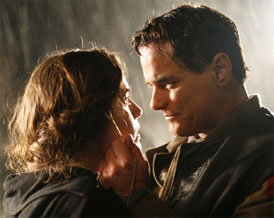 The video-game inspired movie, Max Payne, starring Mark Wahlberg, has knocked Beverly Hills Chihuahua (Tribute user rating: 3.85 stars) down from the top spot at the box office, where it’s been top dog two weekends in a row. The action pic earned $18 million and was given a 3.57 star rating by Tribute.ca users, while the dogs added $11.2 million to their take, for $69 million total. The Secret Life of Bees starring Dakota Fanning and Jennifer Hudson ranked #3 with $11.1 million and earned a Tribute user rating of 3.6 stars. W., Oliver Stone‘s George W. Bush biography, earned a 3.56 star ranking at Tribute and $10.6 million at the box office, putting it in fourth place. Eagle Eye dropped a spot to round out the top five at the weekend box office with a Tribute ranking of 4.12 stars. The Canadian film Passchendaele debuted in second place at the Canadian box office, earning $847,522 and an impressively high Tribute ranking of 4.68 stars.