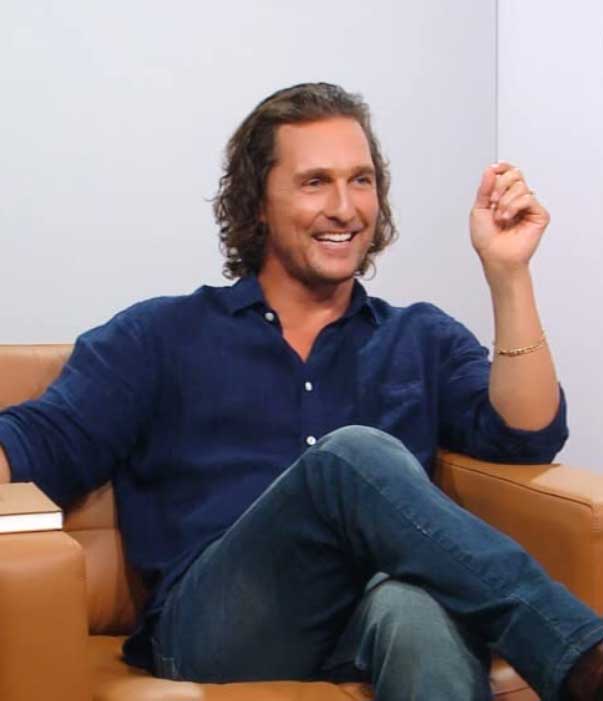 AARP Magazine recently sat down with 51-year-old actor Matthew McConaughey to reflect on his life and career. In the interview, McConaughey revealed that stepping away from rom-coms was a scary decision — one that caused his family to question him.

McConaughey earned fame throughout the mid-’90s and early 2000s. During the latter, he was typecast for his Southern charm as the “king of rom-coms,” appearing in classics such as The Wedding Planner (2001) and How to Lose a Guy in 10 Days (2003).

“There’s a certain buoyancy built into rom-coms that isn’t about hanging your hat on humanity, like a drama is. You stay light,” McConaughey said to AARP. “In my life, though, I was going very deep,” he continued. With that depth came a desire for more serious work. But despite accepting pay cuts, dramas were not being offered. It was then that he decided to quit. During a period of not working, McConaughey found solace in his wife, Camila Alves. Alves said to McConaughey that if he was going to leave the rom-com space, “We’re not going to half-ass it.”

Then came the great hiatus. McConaughey turned down every rom-com script that came his way, including one that paid $14.5 million. Eventually studios caught wind of the pattern and stopped sending rom-com scripts his way. But not just rom-coms — all scripts. McConaughey said no offers came in for almost a year and a half.

Despite the uncertainty, McConaughey referred to this time as his “McConnaissance,” a rebirth. After finding anonymity by not appearing onscreen, the actor got his break in the dramatic sphere in 2011. Following a two-year long “unbrand,” McConaughey found a new place in Hollywood by starring in films like Dallas Buyers Club, The Lincoln Lawyer, Magic Mike, and True Detective. He won the Academy Award for Best Actor for his performance in Dallas Buyers Club in 2014.

McConaughey has found success in dramas, rom-coms, sci-fi, and more. But he’s not done just yet. Another “McConnaissance” could be in the books as McConaughey looks to pivot into a leadership position. “Politics? Another book? A ministry? The crux of it is to help others,” he said to AARP. “We’re coming out of a time of limbo and evolving, as people and as a nation. We’ve got to come together and have some sort of unity — I think everyone can agree we can use that.”~Cassandra Coleman