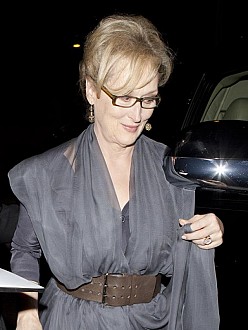 Meryl Streep collected an Icon Award at the Palm Springs International Film Festival Saturday night. The awards were the first of the New Year but are a more low-key event than the glitzy ceremonies which follow, with winners announced in advance, lending a more relaxed atmosphere to other events. Picking up her trophy - only the second Icon Award given by the festival in its 25 year history - Meryl told the crowd: ''My four children remind me everyday that I am not an Icon. I don't feel like an icon. Most of the days I feel like 'I can't.' [But] I feel like I'm an example now in my dotage of the fact that you just can't put those old gals out to pasture. We've got a lot of stuff still to say.'' Other stars to be awarded at the event included Tom Hanks, Sandra Bullock, Julia Roberts, Matthew McConaughey, 12 Years a Slave director Steve McQueen and the cast of American Hustle.