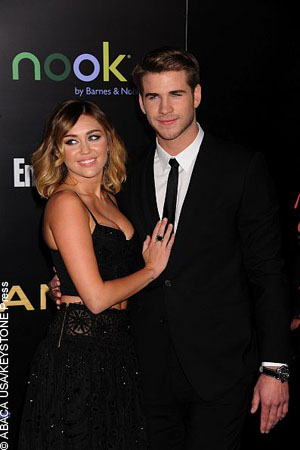 The public can breathe a sigh of relief, Miley Cyrus can in fact be tamed. The 19-year-old singer announced in a statement today that she and 22-year-old boyfriend, Liam Hemsworth, are engaged after three years of dating. “I’m so happy to be engaged and look forward to a life of happiness with Liam,” Cyrus told People magazine. Like any great Nicholas Sparks melodrama, the couple met on-set of their 2009 romantic tearjerker, The Last Song. They briefly broke things off in 2010 but reunited shortly afterwards. The Australian actor is following in the footsteps of big brother Chris Hemsworth who got married to actress Elsa Pataky more than a year ago and recently welcomed their first child. Details on the wedding are still unknown but it’s unlikely they’ll have much time to plan it at the moment. Cyrus is currently recording her upcoming album and Hemsworth is scheduled to shoot three movies this year — the heist movie Empire State, the espionage thriller Paranoia and the second Hunger Games installment, Catching Fire. ~Kyle Sharp