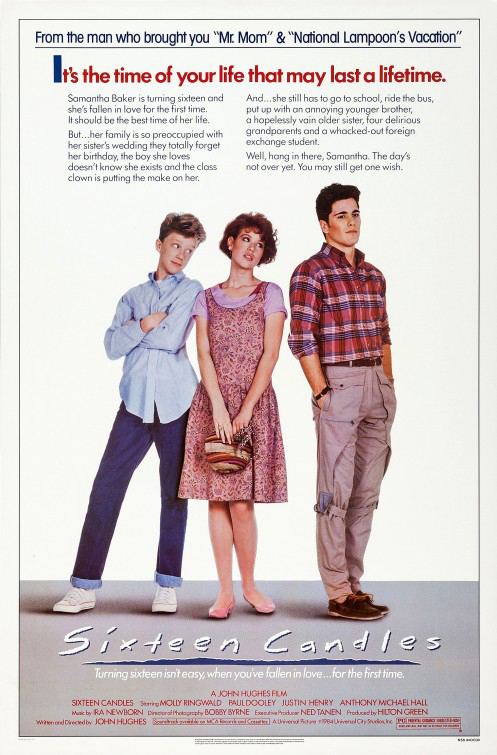 In a recent interview with National Public Radio (NPR), Molly Ringwald took a look back at some of the classic roles that catapulted her into stardom in the 1980s, and she definitely has some concerns, particularly with the movie Sixteen Candles.

The 1984 John Hughes coming-of-age film starred Molly as Samantha Baker, a moody teenager pining after Jake Ryan (played by Michael Schoeffling), a handsome senior jock. In one scene, Jake makes a comment alluding to taking advantage of his unconscious girlfriend: “I’ve got Caroline in the bedroom right now, passed out cold. I could violate her 10 different ways if I wanted to.” Later in the film, Caroline is tricked into believing Ted (Anthony Michael Hall) is Jake — and the two have drunken sex together.

Now, especially after watching the movie with her teenage daughter, Molly says she finds scenes like these very troubling.

“I do see [Sixteen Candles] differently,” she said. “I mean, there were parts of that film that bothered me then. Although everybody likes to say that I had, you know, John Hughes’ ear and he did listen to me in a lot of ways, I wasn’t the filmmaker.”

Molly, now 50, admitted it was not Hughes’ intention to make another raunchy comedy like Porky’s or Animal House, but what was deemed acceptable and unacceptable in the ’80s is certainly different from what we consider acceptable or unacceptable today.

“I feel very differently about the movies now, and it’s a difficult position for me to be in because there’s a lot that I like about them,” Molly said. “And of course I don’t want to appear ungrateful to John Hughes, but I do oppose a lot of what is in those movies.”

In April, she wrote an essay for The New Yorker titled “What About ‘The Breakfast Club’? Revisiting the movies of my youth in the age of #MeToo.” In it, she examined another one of her classic films and cast a critical lens over the sexist and racist undertones, particularly a scene in which Judd Nelson’s character, Bender, is implied to have inappropriately touched Molly’s character, Claire, beneath a library table.

“If I sound overly critical, it’s only with hindsight,” she wrote. “Back then, I was only vaguely aware of how inappropriate much of John’s writing was, given my limited experience and what was considered normal at the time.”

Although she does not condone her past movies portraying sexual assault as a norm of teenage life, Molly told NPR she is proud of her career and believes Hughes’ movies were able to relate to young people and give them much-needed reassurance about their struggles.

“Having a teenage daughter myself, I know that it’s not always easy to get teenagers to talk,” she said. “But these films sort of break through that. There’s something that really touches teenagers, especially The Breakfast Club I feel like sort of gives them permission to talk about their feelings — say that teenagers’ feelings really matter. And I think that’s a really powerful message.” ~Caitlyn Clancey