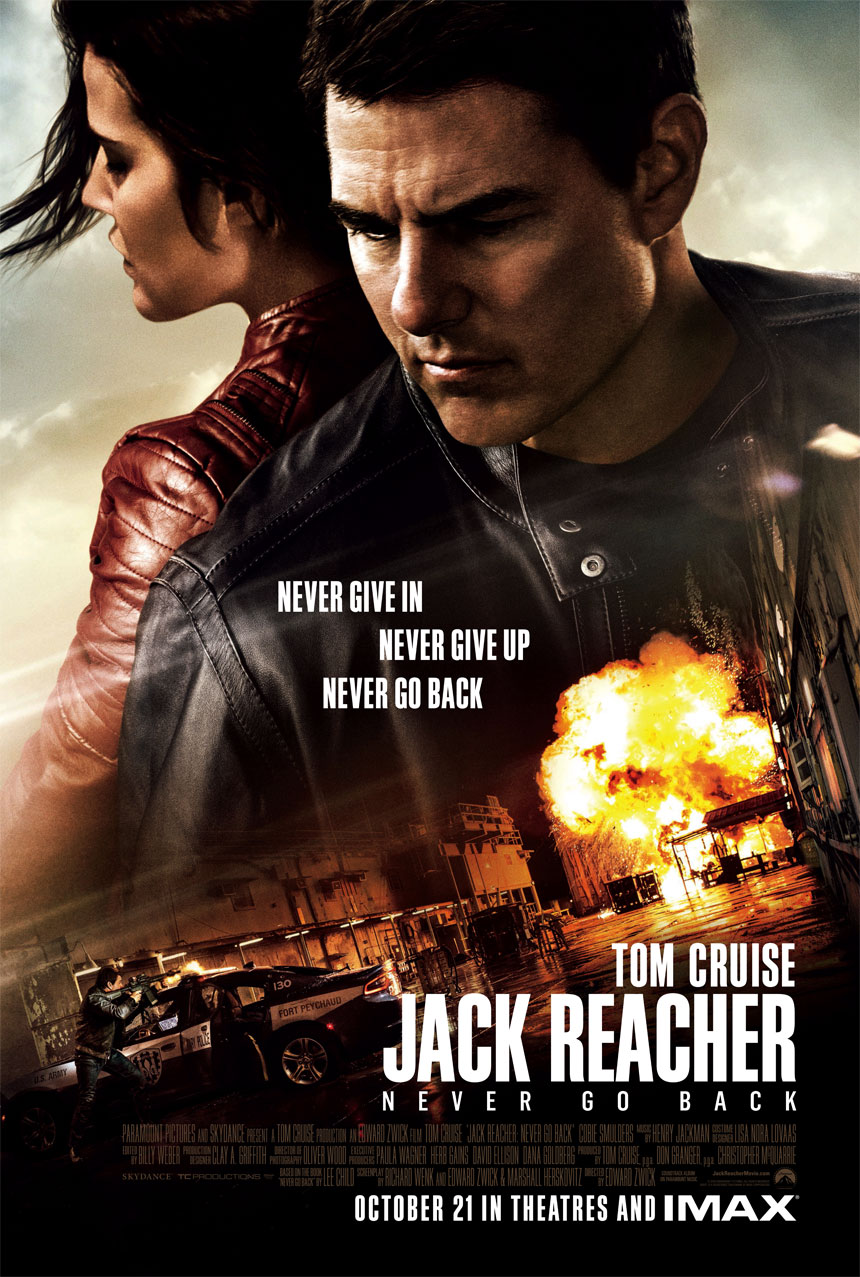 Despite what the film title may say, Tom Cruise is in fact back and taking theaters by storm this weekend in the action-packed Jack Reacher: Never Go Back. Or join a gullible couple (Zach Galifianakis, Isla Fisher) as they meddle in the covert affairs of spies, turning their quiet suburban neighborhood into a hot spot for action in Keeping Up with the Joneses.

Jack Reacher: Never Go Back – Four years since the events of the first film, Jack Reacher (Tom Cruise) returns to the headquarters of his old military unit to find out he’s accused of a homicide that took place 16 years earlier. He also finds his former Army Major, Susan Turner (Cobie Smulders), was arrested for treason. Knowing she is innocent, he sets out to break her out of prison and uncover the truth behind a government conspiracy. Jack finds out he’s part of something bigger, as he discovers a secret from his past that could change his life forever. Click here for showtimes.
Trailer: Jack Reacher: Never Go Back

Keeping Up with the Joneses – Suburban couple Jeff (Zach Galifianakis) and Karen (Isla Fisher) live normal, boring lives. That is, until the Joneses move next door. Tim (Jon Hamm) and Natalie Jones (Gal Gadot) are not your run-of-the-mill kind of couple, they’re suspiciously perfect. Karen and Jeff decide to break into the Joneses’ house to see if they can find anything unusual. It turns out their new neighbors are covert operatives and before they know it, Jeff and Karen are involved. Click here for showtimes.
Trailer: Keeping Up with the Joneses

Ouija: Origin of Evil – In 1965 Los Angeles, a widowed mother named Alice Zander (Elizabeth Reaser) holds séances using a Ouija board for clients to speak to their dead loved ones, but her business is actually a scam. Little does she know that by using the board, she has unwittingly invited authentic evil into her home. When her youngest daughter Doris begins to show signs of aggression and strange behavior, it is revealed that she was overtaken by a merciless spirit. Now, this small family confronts unthinkable fears to save her and send her possessor back to the other side. Click here for showtimes.
Trailer: Ouija: Origin of Evil

American Pastoral – In 1960s postwar America, a family’s seemingly idyllic existence is shattered. Successful businessman Seymour “Swede” Levov (Ewan McGregor) is married to a former beauty queen named Dawn (Jennifer Connelly). He watches his life fall apart when his beloved daughter Merry (Dakota Fanning) is accused of committing a savage act of political terrorism. Swede must find her and reunite his family, before they are ruined. The film is based on the Pulitzer Prize-winning novel of the same name by Phillip Roth. Playing in Toronto and Vancouver. Click here for showtimes.
Trailer: American Pastoral

Mean Dreams – Jonas (Josh Wiggins), 15, meets fellow teen Casey (Sophie Nélisse), who just moved to the neighboring farm with her father Wayne (Bill Pullman). They become instant friends. Unfortunately, he soon realizes Casey’s father is a violent, abusive man who, despite being a policeman, is involved in illegal activity. Worried about Casey’s safety, Jonas steals money from Wayne and runs away with the girl. With Wayne hunting for them (and for his money), they have to get far away from him or risk Wayne possibly killing Jonas for revenge. In select cities. Click here for showtimes.
Trailer: Mean Dreams

Howard’s End: Restored in 4k – Margaret Schlegel (Emma Thompson) and her sister Helen (Helena Bonham Carter) become involved with two couples: wealthy, conservative industrialist Henry Wilcox (Anthony Hopkins) and his wife Ruth (Vanessa Redgrave), and working-class man Leonard Bast (Samuel West) and his mistress Jacky. The Wilcoxes live at Howard’s End, which Ruth has inherited through her family. The fates and misfortunes of these three families are interwoven and connected to the ownership of Howard’s End. Based on E.M. Forster’s classic 1910 novel about class relations and changing times in Edwardian England. In select cities. Click here for showtimes.
Trailer: Howard’s End: Restored in 4k

Tyler Perry’s Boo! A Madea Halloween – Madea (Tyler Perry) finds herself in the middle of mayhem, spending Halloween fending off killers, poltergeists, ghosts, ghouls and zombies due to an unknown virus spreading around the world. Towns are looted and abandoned, while human civilization is in hysterics. When the creatures appear at her front door, Grandma Madea arms herself to take on the evil forces of the undead — and does this all while keeping a watchful eye on a group of disobedient and unruly teens. In select cities. Click here for showtimes.
Trailer: Tyler Perry’s Boo! A Madea Halloween

The Whole Truth – Mike Lassiter (Gabriel Basso), 17, is accused of stabbing and murdering his wealthy father Boone Lassiter (Jim Belushi). Defense attorney Richard Ramsay (Keanu Reeves) and his young associate Janelle (Gugu Mbatha-Raw) are tasked with proving their young client’s innocence. Mike’s mother Loretta (Renée Zellweger) begs Richard to save her son from prison. As the pieces start to fall together, Janelle begins to suspect that Richard and Loretta may be much more involved in what happened on that fateful day. In select cities. Click here for showtimes.
Trailer: The Whole Truth

The People vs. Fritz Bauer – In the late 1950s, German district attorney Fritz Bauer devotes his energies to bringing the Third Reich to justice, despite the apathy that surrounds him in regards to the horrors of the country’s recent past. Knowing that Nazis still lurk within Germany’s corrupt judiciary system, Bauer travels to Jerusalem to seek alliance with Mossad, the Israeli secret service, even though he knows it’s considered treason — but it’s the only way Bauer can move forward and bring Nazi Adolph Eichmann to justice. In select cities. Click here for showtimes.
Trailer: The People vs. Fritz Bauer

The Third Party – Andi is an event planner and an aspiring fashion designer whose life has taken a rapid downturn. With no one else to turn to, she contacts her ex-boyfriend Max in the hopes that they can reconnect. However, she learns he’s already in a three-year live-in relationship with a pediatric oncologist named Christian, who also happens to be a man. In a precarious financial situation and still with nowhere else to go, Andi is forced to move in with the couple. In Filipino w/ English subtitles. This is a limited release. Click here for showtimes.
Trailer: The Third Party

Luck-Key – Based on the Japanese film Key of Life, this Korean adaptation follows a hitman who hits his head and loses his memory at a public bathhouse. A struggling actor who also happens to be in the bathhouse then takes advantage of the killer’s memory loss and swaps locker keys with him. In Korean w/ English subtitles. This is a limited release. Click here for showtimes.
Trailer: Luck-Key

Desi Munde – Based on true events, Desi Munde follows a group of recent graduates who decide to leave their hometown in Punjab to find better job opportunities and make their dreams come true. In order to make it to the U.K., they hire someone to facilitate their passage, which includes making them fake visas. After months of traveling, they are smuggled in refrigerator trucks to their final destination — London. However, after three days in the truck, they are found frozen to death in a remote town. The only survivor is Garry, who makes his way to London and finds himself accused of a crime he did not commit. In Punjabi w/ English subtitles. Click here for showtimes.
Trailer: Desi Munde