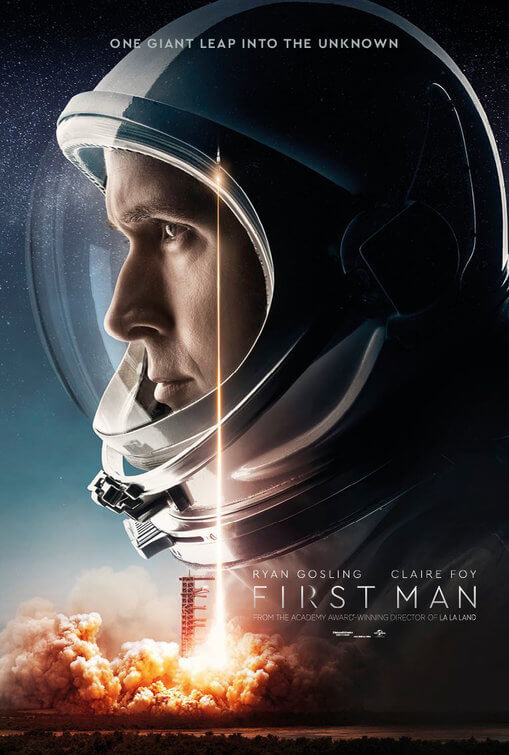 Get ready to blast off with the release of the highly anticipated biographical drama First Man starring Ryan Gosling as astronaut Neil Armstrong, in his journey to become the first man to walk on the moon. There are also plenty of other fantastic movies releasing today that are sure to entertain, thrill, and move audiences. Check out all the new movies opening in theaters across Canada below. ~Caitlyn Clancey

First Man – The story of astronaut Neil Armstrong (Ryan Gosling) and the legendary space mission that led him to become the first man to walk on the moon on July 20, 1969. When the Cold War ignites a rivalry between the U.S. and Soviet Union, a race ensues to see which country will be the first to send a man to the moon. America enlists Armstrong to command the dangerous lunar landing mission, and as the launch date looms closer, Armstrong must fight to ignore the catastrophic danger and growing doubts that surround this impossible goal. Click here for showtimes.
Trailer: First Man

Bad Times at the El Royale – Several guests arrive at the rundown El Royale hotel, and each one houses dark secrets about their past. All will be revealed during one fateful night at the El Royale, a hotel filled with secret passages, cameras, and two-way mirrors, so every guest is under constant surveillance. The unexpected arrival of cult leader Billy Lee (Chris Hemsworth) proves the tipping point for this wild, unforgettable evening during which alliances will be formed, secrets will come to light, and no one is guaranteed to make it to their checkout time. Click here for showtimes.
Trailer: Bad Times at the El Royale

Studio 54 – The infamous Studio 54 nightclub was the place to be if you were a celebrity in the late 1970s, with the likes of Elizabeth Taylor, Elton John and Robin Williams gracing its velvet-roped threshold. But after a police raid, it was discovered this popular hangout was housing bags of cash and drugs in its basement. Discover the truth about the club’s rise and fall, and about the men behind the notorious New York disco. Opening in Toronto and Montreal. Click here for showtimes.
Trailer: Studio 54

Free Solo – Follows the journey of the climber Alex Honnold and his death-defying climb of the three-thousand-foot rock wall known as El Capitan in Yosemite without the use of any rope or safety gear. Opens today in Toronto and Montreal and October 19 in Vancouver. Click here for showtimes.
Trailer: Free Solo

American Chaos – For six months before the American presidential election, director Jim Stern traveled red states asking about Donald Trump’s appeal, and why voters were untroubled by things he’d said and done. What Stern learned was a lesson in the central differences dividing America and the cultural divide that is tearing apart our democracy today. Opens today in Toronto and October 15 in Montreal. Click here for showtimes.
Trailer: American Chaos