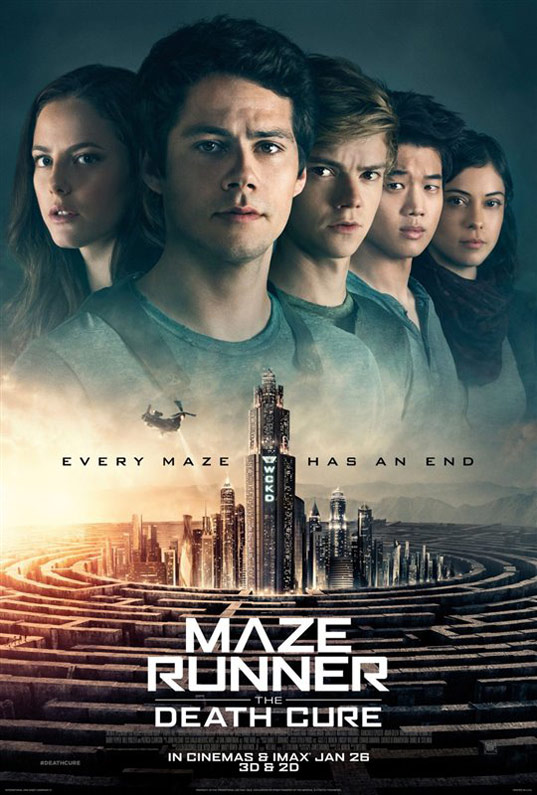 , the final installment in the popular Maze Runner series starring Dylan O’Brien is opening today, as well as a couple of smaller releases that will appeal to moviegoers who love romance, drama and mystery. What do you plan to see at the movies this weekend? ~Alexandra Heilbron

Maze Runner: The Death Cure – To keep a disease from turning people into zombies, Thomas (Dylan O’Brien) and the other Gladers go on a mission to find a cure. To accomplish their goal, they have to face off against WCKD one final time. Friendships are tested and loyalties are strained as the fight for survival comes to a climax. Click here for showtimes.
Trailer: Maze Runner: The Death Cure

Hollow in the Land – Alison (Dianna Agron) is trying to take care of her brother Braydon, but with a jailbird father and an absent mother, it’s difficult. Braydon keeps getting into trouble and when a body is found in a trailer park, the police think Braydon is the murderer. With Braydon missing and the cops searching for him to bring him to justice, Alison tries to find Braydon and clear his name. Opening in select cities. Click here for showtimes.
Trailer: Hollow in the Land

Film Stars Don’t Die in Liverpool – Oscar-winning American actress Gloria Grahame (Annette Bening) moves to England when movie roles dry up in Hollywood. She meets a young actor (Jamie Bell) there and despite the age difference, a romance develops between the two. Opening in Toronto today and on Feb. 9 in Montreal. Click here for showtimes.
Trailer: Film Stars Don’t Die in Liverpool