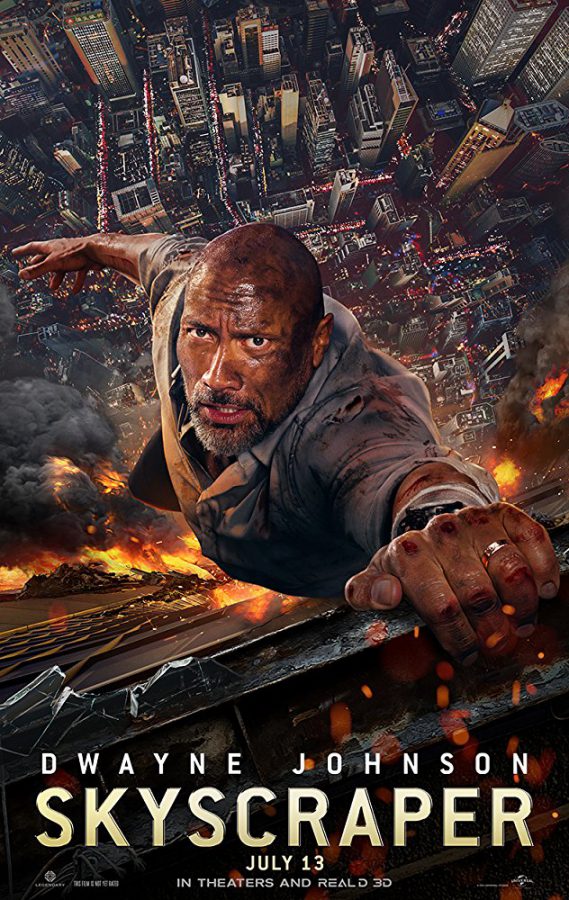 What a great time to get out to the theater! The action-packed thriller Skyscraper starring Dwayne Johnson opens today, as well as the family friendly Hotel Transylvania 3: Summer Vacation starring Adam Sandler. Check out all the new releases below. ~Ari Derin

Skyscraper – Former FBI Hostage Rescue Team leader and U.S. war veteran Will Sawyer (Dwayne Johnson) now assesses security and safety measures for the world’s tallest buildings and skyscrapers. In China, Sawyer and his family are invited to stay at the Pearl, a luxurious 240-floor skyscraper. While Sawyer is in a meeting, a group of terrorists seize the building and set fire to the 96th floor, trapping Sawyer’s wife (Neve Campbell) and their children above the fire line. Now, Sawyer must figure out why all of this is happening and rescue his loved ones while navigating through a burning skyscraper. Click here for showtimes.
Trailer: Skyscraper

Hotel Transylvania 3: Summer Vacation – Hotel Transylvania owner Count Dracula’s (Adam Sandler) daughter Mavis (Selena Gomez) decides he needs a vacation and convinces him to accompany her and the rest of their monster family on a luxury cruise. Although he’s initially reluctant, Dracula eventually agrees. Dracula finds himself attracted to the ship’s beautiful cruise director, Ericka (Kathryn Hahn), who reciprocates his feelings. However, as it turns out, she is the great-granddaughter of vampire hunter Van Helsing, which leads Mavis to question Erika’s intentions. Click here for showtimes.
Trailer: Hotel Transylvania 3: Summer Vacation

Sorry to Bother You – Cassius Green (Lakeith Stanfield) is struggling to make a living. He gets a job as a telemarketer, but it’s not until a fellow black employee (Danny Glover) advises him to use his “white” voice, that Cassius becomes successful. He gets promoted to the upper floor, where he’s provided all kinds of perks. However, he soon realizes that what he is being asked to do is morally wrong. Playing in select cities. Click here for showtimes.
Trailer: Sorry to Bother You

Soorma – When Sandeep Singh (Diljit Dosanjh) meets a talented female field hockey player, he works day and night to become a great player himself. His dreams come true when his team is headed to the World Cup, but his world comes to a halt when an accidental gunshot paralyzes Sandeep from the waist down. Sandeep struggles to get back on his feet and when he makes a miraculous comeback, the news makes the headlines in India. Playing in select cities. Click here for showtimes.
Trailer: Soorma

Whitney – This documentary is an intimate, unflinching portrait of Whitney Houston and her family. Using never-before-seen archival footage, exclusive demo recordings, rare performances, audio archives and original interviews with the people who knew her best, Oscar-winning filmmaker Kevin Macdonald unravels the mystery behind “The Voice,” who thrilled millions even as she struggled to make peace with her own troubled past. Opening today in Toronto, Montreal and Vancouver, and in Calgary, Edmonton, Winnipeg, Victoria and Halifax on July 20.  Click here for showtimes.
Trailer: Whitney

Three Identical Strangers – The true story of why identical triplets were separated and how years later, when they were 19, they discovered by accident that they were brothers. When the teens find out what happened, they’re understandably angry that they were denied information that dramatically impacted their lives. Opening today in Toronto and Vancouver, and in Montreal on July 20.  Click here for showtimes.
Trailer: Three Identical Strangers

Gauguin: Voyage to Tahiti – Paris, 1891. Unable to make ends meet for himself and his family, painter Paul Gauguin (Vincent Cassel) moves to the Marquesas Islands so he can paint the wilderness. Settling in a hut on the outskirts of a Tahitian village, the penniless painter paints at all hours of the day. When Gauguin goes on an excursion to the mountains, the Maori people welcome him and offer him Tehura, the daughter of the chief, in marriage, on the promise that he will make her happy. Gauguin makes the young woman the subject of his biggest paintings. Opening today in Toronto, Ottawa and Regina. Click here for showtimes.
Trailer: Gauguin: Voyage to Tahiti

The King – Filmmaker Eugene Jarecki takes a road trip across America in Elvis Presley’s 1963 Rolls Royce, 40 years after the superstar’s death. He explores how a country boy lost his authenticity and became a king, while his country lost her democracy and became an empire. Opening in Toronto. Click here for showtimes.
Trailer: The King