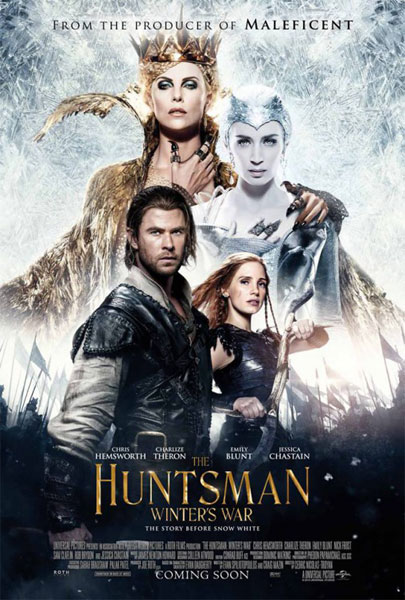 There’s only one wide release opening today in theaters — The Huntsman: Winter’s War, starring Chris Hemsworth and Charlize Theron. There’s a good reason for that — The Jungle Book is not going to be easily dethroned as the king of the box office this weekend. However, The Huntsman: Winter’s War is expected to do well at the box office, even if it won’t rule. And if you’re looking for something a little different, there are also several smaller releases as well to choose from. Take a look.

The Huntsman: Winter’s War opens all across Canada today. It stars Charlize Theron as evil Queen Ravenna, who betrays her good sister Freya (Emily Blunt). This turns Freya against her sister as she calls upon her Huntsmen, including Eric (Chris Hemsworth) and Sara (Jessica Chastain), to overcome Ravenna and put a stop to her wickedness. Click here for showtimes.
Trailer: The Huntsman: Winter’s War

Tom Hanks stars as a stressed-out American businessman in A Hologram for the King, which opens in select cities. Once a hot shot salesman, Alan Clay is down on his luck. He persuades the company he works for to let him pitch a 3D holographic meeting system to the King of Saudi Arabia. Unfortunately, Alan is working on commission so if he doesn’t get a sale, he doesn’t make money, which adds to his stress. In Saudi Arabia, he has an anxiety attack, then falls for the beautiful local doctor who treats him. Click here for showtimes.
Trailer: A Hologram for the King

Sally Field plays Doris, a never-married woman in her sixties who has led a sheltered life in Hello, My Name is Doris, which already opened in the U.S. and has had great reviews from both critics and audiences. Doris falls for a much younger co-worker and with the help of her friend’s 13-year-old granddaughter, finds out where he’ll be hanging out and makes an appearance. Her quirky ways win over his friends, but her friends and family think she’s making a fool of herself. Opens in select cities — click here for showtimes.
Trailer: Hello, My Name is Doris

Teens are going to love talented newcomer Ferdia Walsh-Peelo in Sing Street, opening in Toronto today and in Vancouver next Friday (April 29), then on May 13 in Halifax, Ottawa, Winnipeg, Calgary, Edmonton and Victoria. It’s about a teenager in Ireland who’s bullied when he has to attend public school due to his parents’ financial problems. To fit in and more importantly, to impress an older girl, he forms a rock band. Click here to check out our interview with Ferdia. Click here for showtimes.
Trailer: Sing Street

The First Monday in May opens in Toronto and Vancouver today, then May 6 in Montreal and expands to other cities throughout spring. This documentary is an inside look at the creation of the Met Gala, which raises funds for The Costume Institute. Oscar winners, super models, pop stars, fashion icons and politicians all show up for the event. Click here for showtimes.
Trailer: The First Monday in May


A Hologram for the King box office Hello My Name is Doris Sing Street The First Monday in May The Huntsman: Winter's War weekend