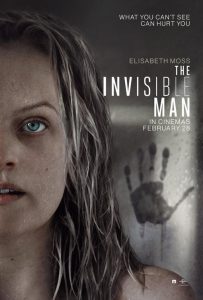 That’s not all to see this weekend, though. Check out all the films hitting theaters below and watch the trailers for a total of five films, with three limited releases debuting in select cities.

The Invisible Man – Cecilia (Elisabeth Moss) is terrified of her abusive, sociopathic boyfriend, Adrian. She runs for her life and learns a short time later that Adrian has committed suicide. Skeptic of the idea that Adrian would kill himself, Cecilia feels an unease. Especially since he once told her that at some point in the future he would be able to walk right up to her, and she wouldn’t be able to see him. She soon discovers strange things happening, and believes Adrian is alive, and has found a way to be invisible. Click here for showtimes.

Disappearance at Clifton Hill – Abby (Tuppence Middleton) returns to her hometown of Niagara Falls when her mother passes away, leaving Abby and her younger sister Laure (Hannah Gross) the family business, the Rainbow Motel. But that’s not the only reason she’s returned. Abby has a memory of a day their family spent at the river, when Abby was by herself in the woods and saw an injured boy being kidnapped. Terrified by what she witnessed, Abby told Laure, but no one else. As she begins to delve into the mystery, she uncovers evidence that may convince skeptics that a crime actually has been committed.

Emma. – Emma (Anya Taylor-Joy) lives a spoiled and privileged life at Hartfield with her father (Bill Nighy). When she decides she has a talent for matchmaking, Emma decides to match her less wealthy friend Harriet to the vicar, even though Robert Martin is in love with Harriet and has asked her to marry him. Although family friend George Knightley (Johnny Flynn) tries to reason with her, because he feels her meddling is ruining Harriet’s chances at a happy life, headstrong Emma insists she knows best. Opening in Montreal, Vancouver and Toronto. Click here for showtimes.

Seberg – In the late 1960s, American actress Jean Seberg (Kristen Stewart) becomes concerned about her country’s oppression of black people. She begins to show up at Black Panther rallies and then finds herself romantically involved with African-American activist Hakim Jamal (Anthony Mackie). Her actions get her targeted by the FBI, which threatens to derail her career. Opening in Toronto. Click here for showtimes.