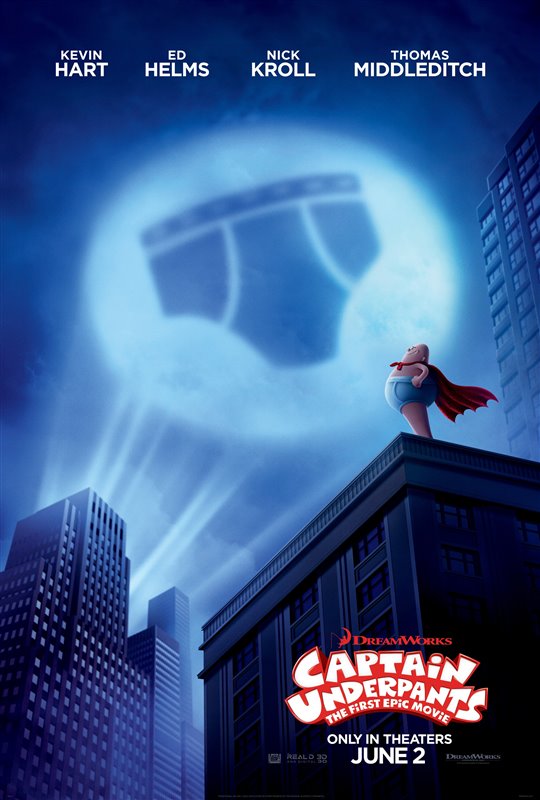 The box office may be in need of some saviors this summer, and it looks like the princess of the Amazons is coming to the rescue. The newest film in the DC universe, Wonder Woman starring Gal Gadot, will be hitting theaters this weekend.  She won’t be alone however, because Mr. Krupp (a.k.a. Captain Underpants) is making his debut on the big screen as well in Captain Underpants: The First Epic Movie. Also hitting theaters this week is the movie Drone starring Sean Bean.

What will you be watching over the weekend? Leave us a comment if you’ll be heading to the theater to see one of these films! ~Brenden Zerihun

Wonder Woman – Diana a.k.a. Wonder Woman (Gal Gadot) is the princess of the Amazons and lives on Paradise Island. She’s trained by her aunt Antiope (Robin Wright) to become an unstoppable warrior. A pilot named Steve (Chris Pine) lands on the island and informs the women about the World War. Diana decides against her mother’s wishes to leave home so she can help the fight alongside Steve. Opening wide today. Click here for showtimes.
Trailer: Wonder Woman

Captain Underpants: The First Epic Movie – A couple of pranksters (Kevin Hart and Thomas Middleditch) terrorize the school staff with their crazy antics. The two create their own comic book featuring a superhero they invented, called Captain Underpants. They soon realize how much the character looks like their school principal, Mr. Krupp (Ed Helms). Things start to get out of hand when they manage to convince Mr. Krupp that he really is a superhero. Opening wide today. Click here for showtimes.
Trailer: Captain Underpants: The First Epic Movie

Drone – Neil (Sean Bean) is a drone operator who completes airstrike missions for the military, but also lives a normal suburban family life. His family has no idea about his secret job, until he is exposed online to a deadly threat. Someone believes he is responsible for killing his family and seeks revenge by any means necessary. Opening today in Toronto, Sudbury, Barrie, and Saskatoon. Click here for showtimes.
Trailer: Drone

Graduation – A doctor is a father who is determined to see his daughter do well in life. When she gets offered a scholarship to study in England, it looks like his dreams are going to come true. However, when the daughter is assaulted and suffers an injury to her wrist, it jeopardizes her chances of obtaining the scholarship. Opening today in Toronto. Click here for showtimes.
Trailer: Graduation

The Recall – Five friends go on a weekend trip to a remote cabin on the lake. While there, they discover a red glow beaming down from the sky. When aliens try to abduct them and other humans, a mysterious stranger (Wesley Snipes) turns up to help them. He seems to have special knowledge of the attack and explains that the aliens have been planning multiple mass abductions of humans for years. Opening tomorrow in Toronto in Barco Escape technology for three showings only. Click here for showtimes.
Trailer: The Recall