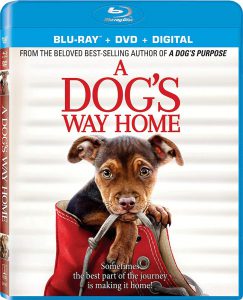 A number of amazing films are making their way to DVD and Blu-ray today, including the audience favorite, A Dog’s Way Home, and the Oscar-nominated Mirai. Check out all the releases below to see which ones you want to get. ~Alexandra Heilbron

A Dog’s Way Home – A young man (Jonah Hauer-King) finds a stray puppy and quickly falls in love with her. He takes her home, and as she grows, the two develop a strong bond. However, when she gets lost, she has to cross 400 miles of wilderness to get home.
Trailer: A Dog’s Way Home

Welcome to Marwen – A man (Steve Carell) who was attacked by a gang and left for dead survives, but loses his memory. He builds a world populated by dolls to help him recover.
Trailer: Welcome to Marwen

Mirai – Kun has been enjoying a happy childhood until the arrival of his baby sister, Mirai, who becomes the center of his parents’ attention. Kun becomes increasingly jealous and withdraws into himself, but through a magical family tree, he meets his relatives at different ages: his mother as a little girl, his great-grandfather as an energetic young man and Mirai as a teenager.
Trailer: Mirai

We Die Young – When ruthless drug lord Rincon (David Castañeda) and his MS-13 gang recruit 10-year-old Miguel to work as a runner, big brother Lucas is desperate to keep Miguel safe. Fleeing for their lives, the boys are rescued by a veteran with PTSD named Daniel (Jean-Claude Van Damme).
Trailer: We Die Young