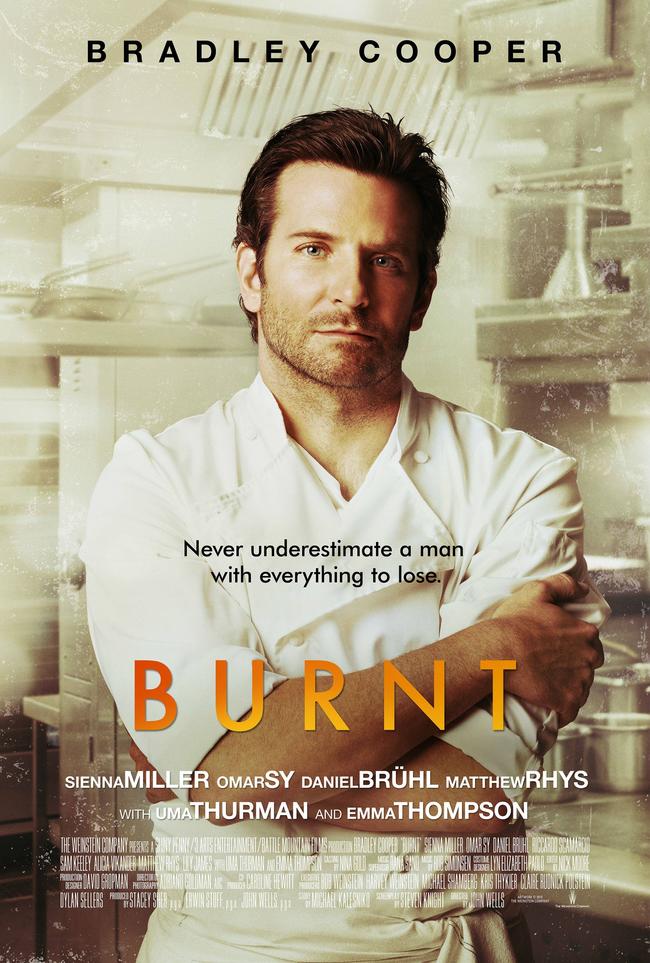 OK, so it’s that time of the week again. That time to head out to your local Best Buy or Walmart (or Amazon) and purchase that DVD you’ve been eagerly awaiting. Go ahead, we’ve got six fresh flicks out on DVD and Blu-Ray today just itching to be watched by you.~Shelby Morton

The romantic comedy for foodies Burnt is out on DVD and Blu-Ray today. Bradley Cooper stars as Adam Jones, a two-star Michelin chef who gets fired from his prestigious job in Paris, essentially ruining his career — all because of his massive drug and alcohol problem. Newly clean, Adam wants to open a new restaurant. He assembles a team of the best chefs in London, including Helene (Sienna Miller) in order to redeem himself and earn a third Michelin star.
Trailer: Burnt

Based on the beloved spooky novel series, Goosebumps follows young Zach (Dylan Minnette) as he begrudgingly moves from New York to a small town in Delaware. He’s completely miserable until he meets the beautiful girl next door, Hannah (Odeya Rush). Hannah happens to be the daughter of famed Goosebumps author R.L. Stine (Jack Black), who secretly keeps all his ghouls, ghosts and monsters locked away in his books. Zach accidentally unleashes all the creatures within the books and now the three must work together in order to send them all back to where they came from.
Trailer: Goosebumps

Directed by and starring Canadian actor Paul Gross, the wartime thriller Hyena Road is about Canadian soldiers stationed in Kandahar, Afghanistan, and how they must deal with personal and professional crises while in hostile territory. Young officer Ryan (Rossif Sutherland) and his superior, intelligence officer Pete Mitchell (Gross) must navigate the various political and moral ambiguities of the Canadian-American initiative to build a road that connects one end of Afghanistan to another, a road that will ultimately change the landscape of the war as they know it.
Trailer: Hyena Road

The Assassin, set in the 8th century during the Tang Dynasty, depicts the life of a young assassin Nie (Shu Qi) who is tasked to kill corrupt politicians by her ruthless guardian and master, Jiaxin. When Nie is unable to follow through with a kill, Jiaxin sends her on a mission in order to test her resolve — she must assassinate the powerful lord who was once her betrothed.
Trailer:  The Assassin

A desperate man sets out to pull off the ultimate crime in the thriller Heist. Vaughn (Jeffrey Dean Morgan) needs $300,000 for his ailing daughter’s medical bills, but is turned down cold by a corrupt casino owner known as The Pope (Robert De Niro). Vaughn then teams up with Cox (Dave Bautista) in order to rob the casino. The two make off with $3 million, but their plan quickly goes awry when they’re forced to hijack a bus in order to avoid getting caught. This crime drama begs the question: how far is a father willing to go for his child?
Trailer: Heist

In the semi-autobiographical dramedy Meet the Patels, Ravi Patel is 30 and single, much to the dismay of his very conservative and very Indian parents. Little do they know, Ravi is in a relationship with a redheaded American woman named Audrey. However, he is still crippled by his parents’ pressure to enter into an arranged marriage. Ravi must now decide what’s more important to him — the approval of his parents or his own happiness.
Trailer: Meet the Patels