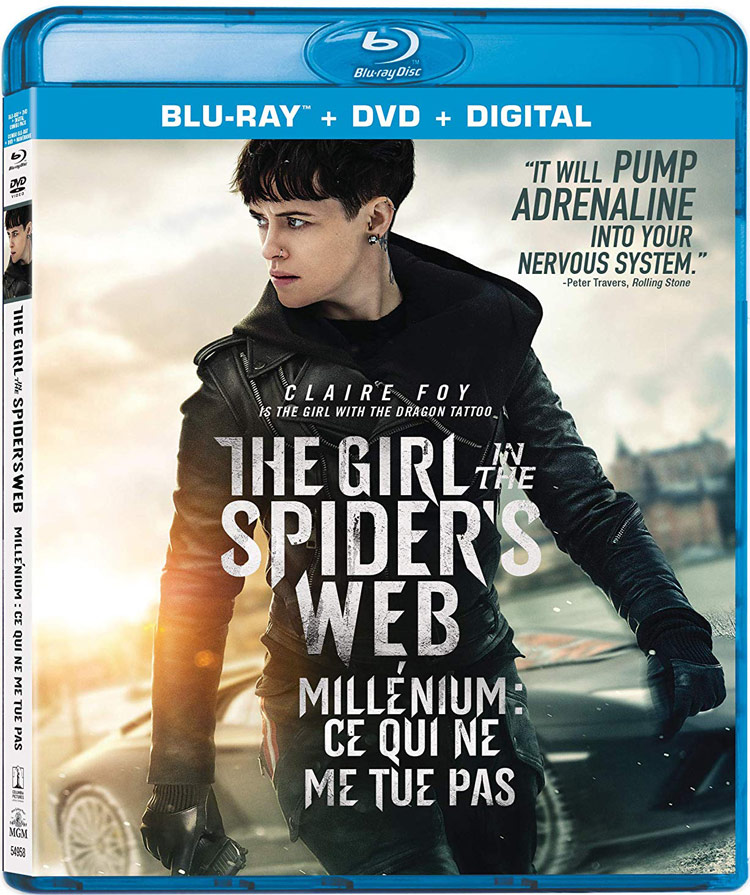 There’s a great selection of DVDs and Blu-rays releasing today, including Widows, for which Viola Davis earned a BAFTA nomination; the beautifully animated Dr. Seuss’ The Grinch; The Girl in the Spider’s Web starring Golden Globe-winning actress Claire Foy and more! Check out all the releases below. ~Alexandra Heilbron

Widows – When Harry Rawlins (Liam Neeson) and his crew steal $2 million from local Chicago hood Jamal Manning (Brian Tyree Henry), the heist goes wrong, leaving Harry and his men dead. Manning wants his money, so he and his brother (Daniel Kaluuya) go to Harry’s widow, Veronica (Viola Davis), and threaten her to get the money or else. Veronica rounds up the widows of Harry’s gang and offers them a split of $3 million if they’ll help her pull off a $5 million heist Harry had planned.
Trailer: Widows

Dr. Seuss’ The Grinch – The Grinch (voice of Benedict Cumberbatch) is a cynical grump who likes to bring misery to people’s lives. When the inhabitants of Whoville decide to make their Christmas celebration three times bigger than it’s ever been before, the grumpy Grinch decides to dress up as Santa, with his faithful dog Max posing as a reindeer, to steal Christmas right out from under their noses.
Trailer: Dr. Seuss’ The Grinch

The Girl in the Spider’s Web – Outcast computer hacker Lisbeth Salander (Claire Foy) is recruited to steal and destroy an NSA program that can access the world’s nuclear codes, so it doesn’t wind up in the wrong hands. When the mission goes wrong, Lisbeth realizes she needs to go on the run, especially when she finds out NSA agent Edwin Needham (Lakeith Stanfield) is trying to track down the stolen program and is hot on Lisbeth’s tail.
Trailer: The Girl in the Spider’s Web

Mid90s – Stevie (Sunny Suljic), 13, joins a gang of older teenage skateboarders when his home life becomes too unbearable. As a part of their group, the boy begins to adapt himself to their ways and tries to prove himself worthy of their friendship, while attempting to stay afloat in their troubling world of sex, drugs and dangerous stunts.
Trailer: Mid90s

Suspiria – Susie (Dakota Johnson) dreamed of studying at the prestigious Markos Dance Academy in Berlin since she was a girl. She immediately impresses the school’s artistic director, Madame Blanc (Tilda Swinton) upon arrival. However, Madame Blanc is the leader of a coven, whose charges are influenced in a variety of ways by the supernatural aspects of the school. Susie begins to have terrifying nightmares as her star quickly rises at the school.
Trailer: Suspiria

A Private War – War correspondent Marie Colvin (Rosamund Pike) sacrifices personal relationships, instead focusing on her work, which takes a toll on her. Her mission to show the true cost of war leads her — along with renowned war photographer Paul Conroy (Jamie Dornan) — to embark on the most dangerous assignment of their lives in the besieged Syrian city of Homs.
Trailer: A Private War

All the Devil’s Men – A battle-scarred mercenary in the War on Terror is forced to go to London on a manhunt for a disavowed CIA operative, which leads him into a deadly running battle with a former military comrade and his private army.
Trailer: All the Devil’s Men


A Private War All the Devil's Men Blu-Ray Dr. Seuss' The Grinch dvd Mid90s Suspira The Girl in the Spider's Web Widows