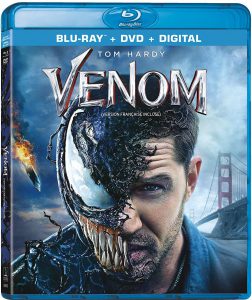 If you missed any of these when they were in theaters, you’ll definitely want to pick them up now that they’re available on DVD and Blu-ray. Venom, which released to the U.S. a few weeks ago is now available in Canada as well. Other new releases on DVD include Hell Fest and What They Had. Check them all out below! ~Alexandra Heilbron

Hell Fest – On Halloween night, a group of friends attend an amusement park horror show called Hell Fest, where they are stalked by a masked man. Initially convinced this is all part of the scary fun, the friends quickly learn he’s an actual murderer and must escape being slaughtered by him, while the other unsuspecting patrons believe it’s just another spooky scare.
Trailer: Hell Fest

What They Had – Bridget (Hilary Swank) returns home when her mother Ruth (Blythe Danner), who suffers from Alzheimer’s, wanders off during a snowstorm. Her brother Nicky (Michael Shannon) doesn’t have the patience to take care of Ruth and resents the responsibility that has been placed on him, believing she should be put in a nursing home instead. His father Burt (Robert Forster) passionately refuses and vows to stay by his wife’s side, no matter what. Click here to buy the Blu-ray.
Trailer: What They Had

Let the Corpses Tan – In order to prepare for a robbery, crime boss Rhino and his team set up their headquarters in a Mediterranean villa that their friend Luce owns. While there, they find themselves entangled with Luce’s colorful guests, and later complete the robbery but are tracked back to the villa by two policemen. What ensues is an all-day, all-night shootout.
Trailer: Let the Corpses Tan


Blu-Ray dvd Hell Fest Venom What They Had