New on DVD – Wonder and more 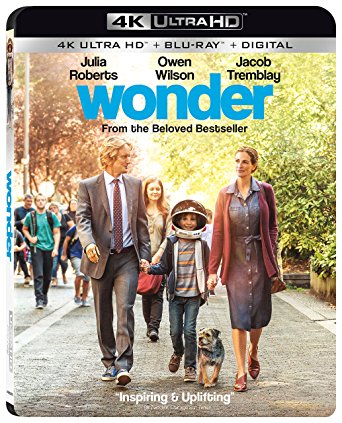 This week we have an interesting selection of movies to choose from. From the heartfelt drama Wonder to the romantic thriller All I See Is You, moviegoers have several options to satisfy their weekly movie cravings.

Wonder – Auggie Pullman (Jacob Tremblay) was born with a facial deformity and has had 27 surgeries in order to help him to breathe, see, and hear without a hearing aid, but he still looks different from other kids. He’s been home-schooled by his mother, Isabel (Julia Roberts), but now that he’s 10, she’s decided he should go to school with other children at the beginning of fifth grade. However, he goes through a rough time as he has to deal with school bullies.
Trailer: Wonder

All I See Is You – Gina (Blake Lively), who went blind when she was a child due to an accident, is now living with her husband James (Jason Clarke) in Bangkok. After a corneal transplant, she can see again. All goes well and Gina is overjoyed to see colors again. However, she has a new sense of confidence and begins to view her life and marriage with her husband differently.
Trailer: All I See Is You

Roman J. Israel, Esq. – Roman J. Israel (Denzel Washington) has spent most of his career as a silent partner in a law firm that specializes in criminal cases and pro-bono work, helping out less fortunate people in Los Angeles. When something happens to his partner, Israel finds himself back in court, handling all the cases in a world completely foreign to him.
Trailer: Roman J. Israel, Esq.

Blade of the Immortal – Samurai Manji has taken a lot of lives, both innocent and guilty, and now lives life in Japan as a criminal. After being cursed with immortality until he kills enough evil men, Manji meets a young girl who hires him as her bodyguard. Swearing loyalty, protection and vengeance against the group of swordsmen who slaughtered her family, the unlikely duo set off on a remarkable quest to make right against those who did them wrong.
Trailer: Blade of the Immortal

Hey Arnold!: The Jungle Movie – Arnold and his best friend Gerald make a humanitarian video in order to win a trip to San Lorenzo, Argentina, where Arnold’s missing parents were last seen. After a few hurdles, Arnold wins the contest. He, his classmates and his teacher all go on a trip to the jungles of Argentina, where Arnold hopes to fulfill his longtime dream of finding his parents.
Trailer: Hey Arnold!: The Jungle Movie

Pokémon the Movie: I Choose You! – The story of how Ash and Pikachu first met. They go on amazing adventures as they search for the Legendary Pokémon Ho-Oh. The pair encounter familiar faces along the way, new characters including Trainers Verity and Sorrel, and even a mysterious new Mythical Pokémon, Marshadow.
Trailer: Pokémon the Movie: I Choose You!


All I See is You Blade of the Immortal Esq. Hey Arnold!: The Jungle Movie Pokémon the Movie: I Choose You! Roman J. Israel Wonder