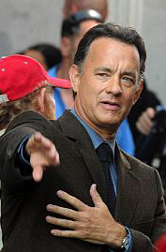 Filming for the new Da Vinci Code movie has taken a hit, as the Vatican sent a clear message to Tom Hanks and his co-stars: “Keep out.” The diocese of Rome has banned Angels and Demons from filming inside its churches because the movie “does not conform to our views,” says spokesman Monsignor Marco Fibbi. Angels and Demons is a prequel to 2006’s The Da Vinci Code – also starring Hanks and directed by Ron Howard. Filming was to take place in two of Rome’s historic churches. “It’s a film that treats religious issues in a way that contrasts with common religious sentiment,” Fibbi told Reuters. “Normally we read the script but this time it was not necessary. The name Dan Brown was enough.”