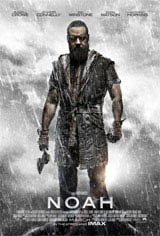 Noah, the newest biblical film starring Russell Crowe, sailed to the top spot at the North American box office on opening weekend, taking in an estimated total of $44 million and earning a 3 Tribute star rating. Last weekend’s top film, Divergent, fell to number two, earning an additional $26.5 million, while enjoying a high 4 star rating from our Tribute readers. Coming in at number three was Muppets Most Wanted, earning $11.4 million for a total of $33.2 million, with a Tribute 4 star rating. Another family friendly film, Mr. Peabody & Sherman, follows in the number four spot, earning another $9.5 million and keeping a high 4 Tribute star rating. Rounding out the top five is the U.S. release God’s Not Dead earning another $9.1 million for a grand total of $22 million and a 4 Tribute star rating from readers, despite not having a Canadian opening. In the top ten are The Grand Budapest Hotel, Sabotage, Need for Speed, Frozen and Non-Stop. For full box office results click here. ~Tarah Bleier