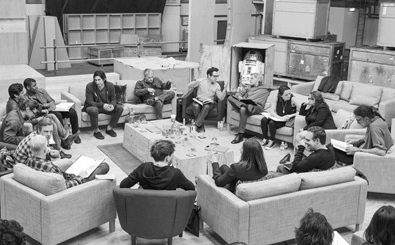 The Star Wars website has been updated to reveal the cast of the seventh installment in the massive franchise. Oscar Isaac, Andy Serkis, Domhnall Gleeson, Max von Sydow, John Boyega, Daisy Ridley and Adam Driver have been confirmed as having been cast in the movie. They’re pictured here reading through the script.

Director J.J. Abrams said, “We are so excited to finally share the cast of Star Wars: Episode VII. It is both thrilling and surreal to watch the beloved original cast and these brilliant new performers come together to bring this world to life, once again. We start shooting in a couple of weeks, and everyone is doing their best to make the fans proud.” There has been no word on which character each actor will be playing. As well, the original cast —  Mark Hamill (Luke Skywalker), Carrie Fisher (Princess Leia), Harrison Ford (Han Solo), Anthony Daniels (C-3PO), Peter Mayhew (Chewbacca) and Kenny Baker (R2-D2) — will be reprising their roles. Star Wars Episode 7 is set to be released December 18, 2015 and is the first of a new trilogy set to take place after Return of the Jedi. ~Dylan Paisley