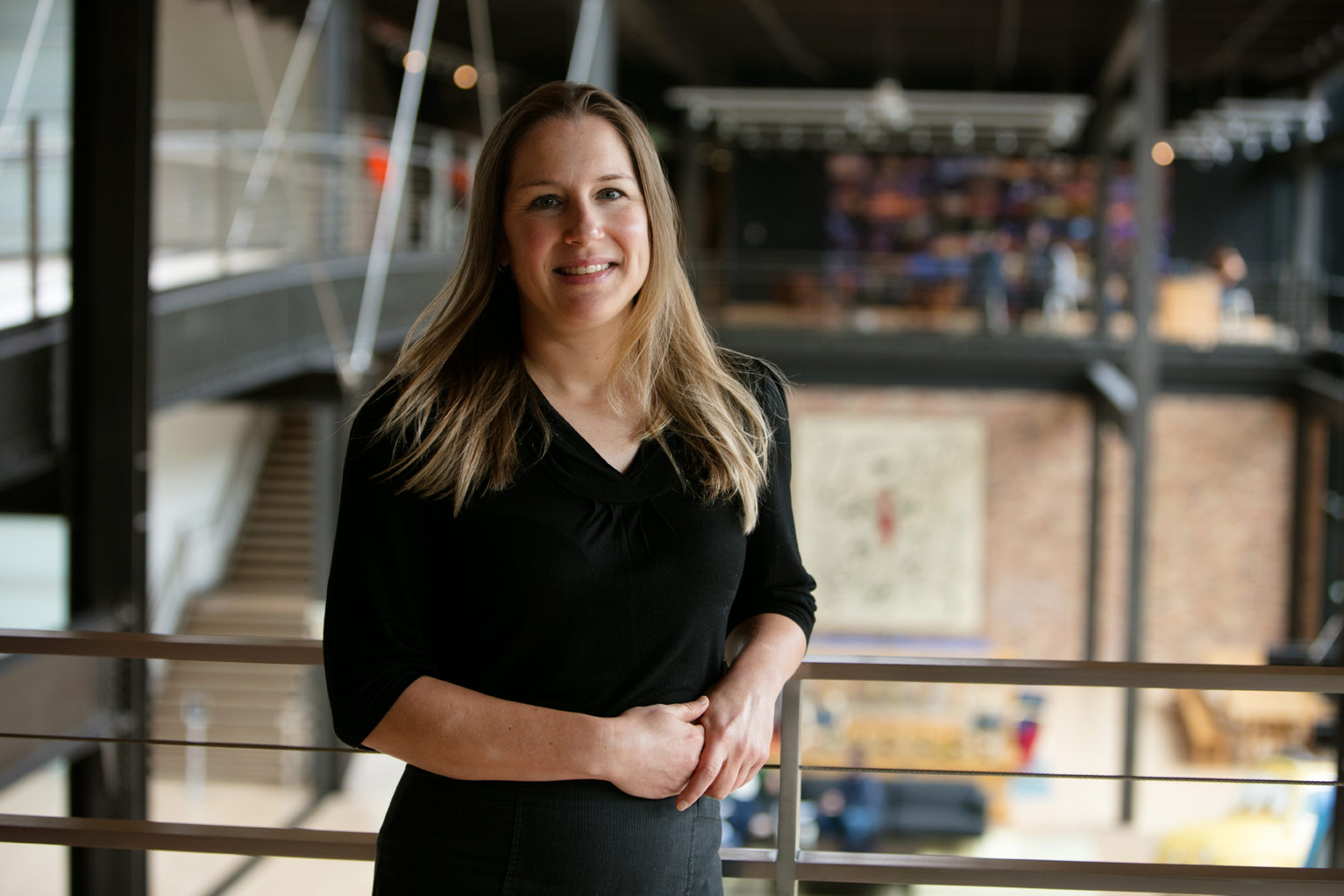 Montreal-born animator Emilie Goulet works at the Pixar Animation Studios in Emeryville, California. We were invited to visit the Pixar studios, where I had the chance to talk to Emilie about the movies she’s worked on, including the upcoming animated feature Onward, starring the voices of Tom Holland and Chris Pratt. We also chatted about her favorite animated movie of all time, what inspired her to want to become an animator, her tips for aspiring animators and more. ~Alexandra Heilbron

What film are you currently working on?
We’ve wrapped up Onward and it’s coming out in March. I just started Soul. It comes out in June.

How young were you when you realized you wanted to be an animator?
That’s such a hard one because I feel like I’ve wanted to be an animator for so long. The first movie I saw in theaters was Fantasia and for some reason I was really attracted to everything I was seeing on the screen. I grew up in a family that was very supportive of the arts and whatever we wanted to do, so as far as I can remember it was always that.

Was Fantasia your favorite animated movie as a kid?
Fantasia has always been my favorite movie. Even through teenage years and adulthood, I keep seeing it differently. As a kid, the things that attracted me to the movie were the more cartoony sequences. Now, I’m more into the stuff that really scared me in that movie, like in the ending, that demon on the mountain, that terrified me as a kid! And I love it today! (laughs)

As a Canadian, is there anything about living and working in the U.S. that came as a surprise to you?
Hm. Lack of maple syrup (laughs). I’m trying to think of something specific. It’s pretty similar but I would say here’s the thing… coming from Montreal and moving to California, the seasons are so different, you know? I first lived in Dallas when I moved to the U.S. and the climate is so different, and just adjusting to that, I really miss the colors of the East Coast when fall happens. I don’t miss the cold that much (laughs). I guess that was the thing that was the most surprising.

How long have you worked at Pixar and what do you like best about working here?
I’ve been here a little more than three years. I started in July 2016. I would say it’s the people, the collaborative work. You’re never on your own with things that are a struggle. There’s always someone there to help you. And you feel empowered to help others as well. I would say that’s the one thing that’s the strongest, it’s the thing that I care the most about.

We had the chance to see several shorts by first-time directors yesterday as part of the SparkShorts program. Would you like to direct a film one day?
I’ve wanted to direct a film for a long time but, here’s the thing that’s interesting. Being an animator at Pixar, you get a lot of creative liberties, like owning your little tiny part of the movie that you’re animating. And it fed a need in me when I started here that I wasn’t able to get at other studios where things just worked differently for a variety of reasons. I still would like to do my own thing, like part of the SparkShorts to begin with. But we’ll see. It’s been a really interesting experience working here — when you start here you’re welcomed with open arms. It’s like, “We’re so happy to have to have you, and we want you, who you are, to be a part of the films we make.”

What are you most proud of in regards to your contribution to Onward?
It’s interesting because one that I really like I can’t really tell you, because it’s a little spoiler towards the end. However, there is a really fun moment that I really liked working on, it’s at the beginning when Ian writes the list of things he wants to accomplish, and as he’s writing down the things, he gets confident. That was super challenging technically, and it’s funny because it can look very simple. It’s just like a pencil on paper and him brightening up, but there are just so many technical challenges to having a character hold a pencil, and make it look like he’s writing naturally, and it’s not a mechanical thing, like it’s not like a puppet writing or something like that. I knew when I got those chunks of shots to animate, it was going to be challenging, but I knew I’d feel very fulfilled by the end.

Which characters did you animate?
Ian, and a little bit of the mom, Laurel.

Is the animation all done on computer? During the SparkShorts screenings we had the opportunity to speak to the directors and one of them had done her film, Kitbull, was hand-drawn in 2D and she said not many people are doing that anymore.
Everything is done on the computer, it’s just a different software when we animate in 2D and 3D. When it comes to drawing, I don’t know if you’ve ever seen those big tablets with digital pens? So that’s how it’s done for the 2D Sparks project. It is interesting because when I first started my career, animation was transitioning — CG was becoming a thing. I studied at Concordia all on paper, and I even remember in my first year filming on this big massive camera, it was so intimidating. But then as soon as I graduated it was really hard to find an outlet with that equipment. So I learned the computer. We still draw though. I feel like those traditional skills are never lost, and I feel that people that have some sense of doing art with real media have something in their backpack already when they start this career. It’s a career, but it’s also something you often start when you’re a kid or teenager because of the drawing.

If someone wanted to become an animator, what advice would you have for them?
I feel like one advice I got when I was a teenager and I wanted to work at Disney — Pixar didn’t exist yet — they told me “Don’t try to draw Mickey, we’ll teach you how to draw Mickey. Just learn how to draw.” And I feel like that’s a really good piece of advice. Learn how to tell your stories, be good at saying what you feel, what you think, your opinions, and the ability to share that, to share stories and obviously learn how to animate. But that’s the most important thing… to have something to say with what you create.

What do you like best about the message in Onward, and what do you think people are going to take away from it?
It’s the idea of recognizing and caring for the people around you who are important in your life. Be grateful for the people who are close to you that you grow from. I feel like family is super important in that movie. I mean the plot is a testament to that, but the more we get into the movie, the more it gets important and highlighted. It’s funny because everybody that started working on that movie, we wanted to do that because there are so many people in our lives that we don’t get to say thank you to when we work on those movies, because we spend so much time here. It’s so demanding. And that film, I feel like it’s almost like a letter to those people that you can say thank you to.

What other films did you work on prior to Onward?
Toy Story 4, before that Incredibles 2, and I worked on a short film that appears on the Incredibles 2 Blu-ray — Auntie Edna. When I first started here, I worked on Coco for a year.

Which has been your favorite so far?
It’s so hard to say. It’s like asking which one is your favorite child. Coco was amazing just because it was the first movie I worked on coming here. And I mean the entire culture aspect of it, learning about the Mexican culture. I didn’t know much about it, I feel like in Canada I didn’t get that chance to be in touch with many Mexican people. Then Incredibles 2 was just a blast because Brad Bird is a director that every animator that I know of would want to work with. And that was just a fantastic experience. Then Toy Story 4 was incredibly special just because when Toy Story came out, I was a teenager and I knew by then that I wanted to be an animator. It looked great and it told an amazing story. It was fun, it was moving, it was entertaining and I loved it. It was very coherent, it was not just eye candy, which was the case with a lot of CG back then. So that was very special. And then, Onward. Onward was fun because it’s an original movie, we didn’t know who the characters were at the beginning of the movie. We’re all making this and discovering who these characters are as we’re going and in order to do a good job with this you have to be vulnerable, you have to be able to take risks, but also allow yourself to make mistakes and that’s so hard to do because everybody does amazing stuff here. And you kind of want to show up and not just be better than people, but you want to be part of the team and make it as good as it can be.

Is there anything you can tell me about Soul? Or is it under wraps?
Yeah, I can’t say… but Pete Docter is directing so that’s really exciting.