Mila Kunis is being sued for allegedly stealing a friend's chicken when they were in first grade together in Ukraine. TMZ reports Kristina Karo, who claims she was best friends with Mila years ago, had a pet chicken nam...

Mila Kunis has laughed off claims she stole a childhood friend’s chicken. The ‘Black Swan’ actress has been accused of stealing Kristina Karo’s beloved pet Doggie when they were kids in the Ukraine, and while she joked she was ”devastated” at the alle…

Mila Kunis and Ashton Kutcher admit to being married

Mila Kunis has admitted she is married to Ashton Kutcher.The couple – who started dating in 2012 – have been coy about their status for several months, but the secret was finally revealed on the first episode of ‘The Late Late Show with James Corden’….

Mila Kunis cried when she left her baby daughter for the first time. The 31-year-old actress was reduced to tears when she left four-mouth-old Wyatt, with whom she has with her partner Ashton Kutcher, in the capable hands of a babysitter while she att…

Mila Kunis wants to learn brain surgery.The ‘Jupiter Ascending’ star – who has four-month-old daughter Wyatt with fiance Ashton Kutcher – enjoys ”random” hobbies away when she isn’t working or looking after her family but admits she secretly longs t…

What Mila Kunis wants her daughter to be

Mila Kunis wants her daughter to be a doctor or lawyer. The Jupiter Ascending star insists it is too early to worry about four-month-old Wyatt – her baby with

Mila Kunis wants to be a ‘sexy’ bride 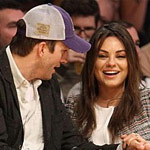 Mila Kunis and Ashton Kutcher have named their baby daughter Wyatt Isabelle Kutcher.Ashton, 36, made the announcement on his website yesterday (10.02.14) and added that he hopes the tot’s life – who was welcomed by her parents earlier this week – will…

Mila Kunis and Ashton Kutcher have reportedly welcomed their first child into the world.The ‘Black Swan’ actress, who started dating her former ‘That 70s Show’ co-star in 2012 and got engaged to him earlier this year, is said to have given birth to a …

Mila Kunis celebrated her baby shower on Sunday (07.27.14).The ‘Black Swan’ star, who is expecting her first child with fiancÃ© Ashton Kutcher this year, attended a top secret party in her honor in Los Angeles, where she was joined by a sm…