ALL THEATRES ARE CLOSED UNTIL FURTHER NOTICE, DUE TO COVID-19.
Celebrity Gossip > Patriot actress Skye McCole Bartusiak dead at 21 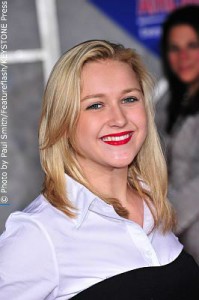 Skye McCole Bartusiak was found dead at the age of 21 last Saturday. She is the second of the young actors to play one of Mel Gibson‘s children in The Patriot to die at a young age. Heath Ledger, who played her older brother, died several years earlier of a suspected drug overdose. Although the cause of her death is currently unknown, the actress suffered recurring bouts of epilepsy since she was an infant. Her mother, Helen, suspects she choked during one of her recent seizures. Skye’s boyfriend discovered the actress’ body on her bed in the garage apartment next to her family’s Houston home. On Twitter, Skye’s friend and Little Miss Sunshine actress, Abigail Breslin, confirmed the news: “One of my very good
friends and someone who was like a sister to me, Skye McCole Bartusiak passed away today. So devastated.”

In addition to numerous TV appearances, including a recurring role on 24, Skye appeared in such well-known films as The Cider House Rules and Riding In Cars With Boys, for which she was nominated for a Young Artist Award. She also played Michael Douglas‘ daughter in Don’t Say A Word. On stage, Skye portrayed Helen Keller in a revival of The Miracle Worker opposite Hilary Swank. “The girl has lived such an amazing life,” Helen told CNN. ~Daniel Horowitz