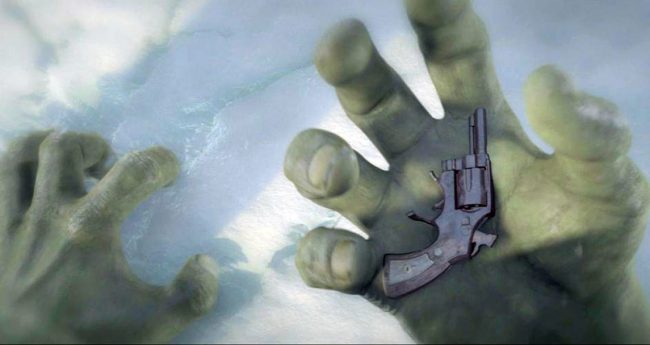 The early years of the Marvel Cinematic Universe typically eschewed going down some dark paths, but that didn't keep them from experimenting. The MCU's second official entry, The Incredible Hulk, did initially open up with a pretty dark sequence in which Ed Norton's Bruce Banner traveled all the way to the Arctic to try and commit suicide. Just as Banner was pulling back the hammer on his revolver, the Hulk took over and crushed the pistol before tossing it to the ground. The scene was initially teased in a trailer, but was cut after director Louis Leterrier deemed it too dark for young audiences. However, the scene was alluded to in 2012's The Avengers when the recast Mark Ruffalo makes reference to this suicide attempt, albeit played out differently with Banner successfully pulling the trigger, only for the Hulk to spit out the bullet.