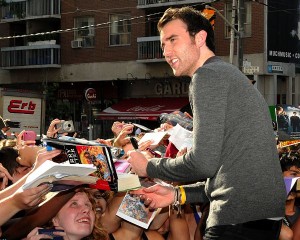 Matthew Lewis walks the black carpet at the Toronto premiere of Harry Potter and the Deathly Hallows: Part 2

Toronto had the chance to capture a bit of Harry Potter glam as it premiered the most-anticipated movie of the summer, Harry Potter and the Deathly Hallows: Part 2, at the Scotiabank Theatre. The Tuesday night movie premiere not only attracted legions of fans who waited in line for hours to get a glimpse of the movie’s star Matthew Lewis —who plays Neville Longbottom—but also drew the likes of

exes Kate Beckinsale and Michael Sheen who brought their daughter Lily to the premiere and after party.

Casa Loma in Toronto played host to the after party, which was attended by Sheen and Beckinsale along with Lewis who took extra time to greet and sign autographs for hundreds of fans who were waiting outside the castle since noon that day.

Harry Potter and the Deathly Hallows Part 2 made its world debut in the U.K. last Thursday and also in New York which was attended by Daniel Radcliffe, Emma Watson and Rupert Grint, who for the past ten years have been playing the young wizards everyone has come to love and cherish.

Harry Potter and the Deathly Hallows is the last of the seven books by J.K Rowling and was split into two movies, the first of which came out last summer. Part 2 marks the end of the series which made international stars out of Daniel Radcliffe, Emma Watson, Rupert Grint and the rest of its cast members.