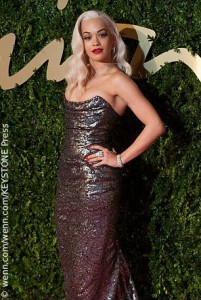 The latest addition to the Fifty Shades of Grey film is British singer Rita Ora. Rita tweeted the news Monday evening, writing, “It’s official! I’ve been cast in @FiftyShades of Grey as Christian’s sister Mia. #FiftyShades” She will play the younger sister of the billionaire played by Once Upon a Time alumni Jamie Dornan, who was cast after the exit of Sons of Anarchy star Charlie Hunnam. This will be Rita’s first major Hollywood role. She has previously only appeared in minor roles on shows including The Brief and 90210 and in films Fast & Furious 6 and Spivs. Fifty Shades of Grey fans tweeted reaction to the casting news on Monday night. Most are outraged at the choice, tweeting comments such as “Eurgh Rita Ora in Fifty Shades. She best not ruin it” and “Rita Ora playing Mia in Fifty Shades just doesn’t fit.”

Other cast members of the flick include Dakota Johnson, Eloise Mumford, Luke Grimes and Max Martini. The film will be produced by Michael de Luca and Dana Brunetti and directed by Sam Taylor-Johnson. It is due to be released February 13, 2015. ~Brie Davis