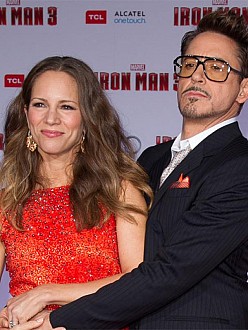 Robert Downey Jr.’s wife refused to marry him until he got sober. The 49-year-old star first proposed to Susan Downey three months after they started dating after meeting on the set of Gothika in 2003, but the 40-year-old beauty threatened to break up with him unless he sought treatment for drug and alcohol abuse. In a new joint interview, she told The Hollywood Reporter: ”Addiction was so foreign to me. I was incredibly ignorant of the hold it had on people.” Robert added: ”Thank God for that. If she knew the depths of my depravity, we would not be sitting here.” The couple – who will welcome a baby girl into the world next month – eventually tied the knot in the Hamptons in 2005 after Robert went to rehab. The duo set up their own production company Team Downey in 2010, and Robert believes they balance each other out. He said: ”We co-parent our children, our relationship, our business. It’s all the same. It’s all part of the therapy of life.”