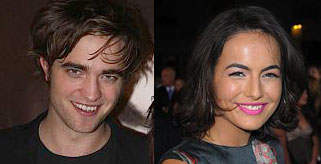 Robert Pattinson, 22, apparently had a serious crush on Kristen Stewart, 18, while they were filming Twilight, but a source told Life & Style magazine that Stewart doesn’t share the same feelings. That’s not surprising to anyone who’s watched Tribute’s interview with Kristen Stewart about Twilight. When asked if she thought Pattinson was “so beautiful that it’s painful to look at him,” Stewart laughed derisively, rolled her eyes and replied, “No. I can’t stroke his ego more than everyone else has.” So it seems that Pattinson has finally gotten the hint and has set his sights on the lovely and talented Camilla Belle, 22. The problem? She’s been dating Joe Jonas, 19, since appearing in the Jonas Brothers’ video, Lovebug (he dumped country singer Taylor Swift, 19, whom he was dating at the time, to be with Camilla). The source told Life & Style, “[Robert is] very attracted to her. They have a lot in common.” However, maybe Camilla should stay right where she is. While filming Twilight, Pattinson told an interviewer that he had no trouble acting out his character’s efforts to push Bella (Stewart) away in the film, because “Wanting to get someone away from you is a universal male trait. Most guys, when they really really like someone they try and push her away because they start seeing all the faults in themselves too explicitly.”