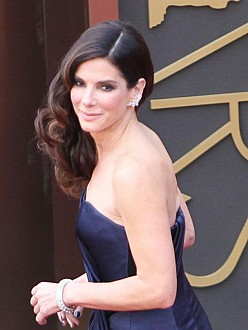 Sandra Bullock wants to move to the UK. The Gravity actress is a huge fan of Downton Abbey and wants to be closer to the action so she's been looking for properties in Newbury, south east England, which is five miles north of the where the period drama is filmed, and is even thinking about how her adopted son Louis would be able to adjust. A source told Heat magazine: ''She loves spending time over there, enrolling her son Louis in a school and maybe doing a bit of work in London. Who knows, she may even be asked to make a guest appearance in Downton. That would be a dream come true.'' Sandra, who worked with George Clooney on Gravity, asked him to get the inside scoop on Downton Abbey from Hugh Bonneville, who plays Robert Crawley on the show, after George worked opposite him in World War II drama Monuments Men. The source explained: ''The show is Sandy's guilty pleasure - she watched every episode. She kept getting George to ask Hugh for Downton gossip. In the end he just put Hugh on the phone and got him to speak to Sandra directly. I think she was a bit starstruck.''