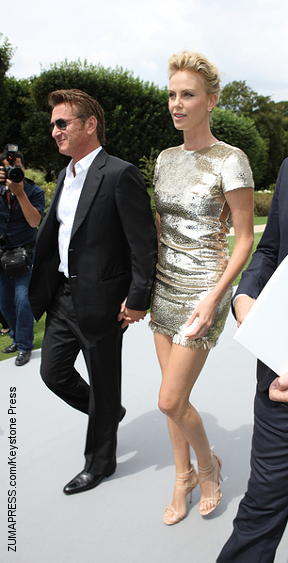 Gangster Squad‘s Sean Penn, 54, and Mad Max: Fury Road‘s Charlize Theron, 39, have reportedly taken their relationship to the next level. A source revealed to Us Weekly that the couple have secretly gotten engaged while vacationing in none other than the City of Love. Sean reportedly popped the question to his amour in Paris. Although the pair are longtime friends they have only officially been dating for less than a year.

This would be Charlize’s first marriage. However, it would be Sean’s third marriage, having previously been married to entertainer Madonna and House of Cards‘ Robin Wright, with whom he has two children. You know what they say, third time’s a charm!

Although the power couple have been photographed together since the news broke, Charlize has yet to sport a ring on the special finger. ~Janine Wyslobicky