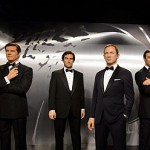 Madame Tussauds has unveiled wax figures of all six actors who have played James Bond. Brand new waxworks of Sean Connery, George Lazenby, Roger Moore, Timothy Dalton and Pierce Brosnan have joined the likeness of Daniel Craig at Madame Tussauds in London, where they will be displayed for….

This week's releases offer four movies that are opening all across Canada and five in limited release. To start with, the wait for HBO's Entourage movie is finally over! Since the series finale in 2011, fans have waited for t...

This week's new trailers will get you excited about going to the theatre to see these movies as soon as they're released. If you're a fan of action and comedy you will be delighted to see that there are a lot of upcoming thri...