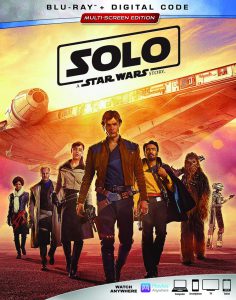 Since acquiring Lucasfilm in 2012, Disney has released Star Wars films on almost a yearly basis, including prequel origin stories that reintroduce the audience to several characters from the original George Lucas movies. Solo: A Star Wars Story tells the origin story of arguably one of the most charismatic and reckless characters in film history: Han Solo.

The movie opens on the fascist planet Corellia, where a young Solo (Alden Ehrenreich) and his lover Qi’ra (Emilia Clarke) are enslaved by Lady Proxima (voice of Linda Hunt), a worm-like crime boss who houses orphans in exchange for stolen goods. Solo and Qi’ra escape and go on the run together, but Qi’ra is captured and insists Solo keep going without her. Devastated, Solo joins the Imperial Army to become a pilot and vows to one day return to Corellia to save Qi’ra.

Fast forward three years and Solo is now a foot soldier for the army after he proved far too stubborn to take orders as a pilot. An unsuccessful encounter with the criminal Tobias Beckett (Woody Harrelson) sends him into a pit to face off against a “beast” who turns out to be Chewbacca. When Solo is able to understand and communicate with the Wookiee, the two team up and escape the pit together. Sensing their worth, Beckett allows them to join his gang made up of his wife, Val (Thandie Newton) and a multi-armed alien pilot named Rio (voiced by Jon Favreau).

An unsuccessful heist winds up with Beckett being indebted to high-ranking criminal boss Dryden Vos (Paul Bettany), who gives the gang a new assignment. They journey into the criminal underworld where they meet Lando Calrissian (Donald Glover) and Solo finds out what happened to Qi’ra.

The biggest difference between Solo and the other Star Wars films is that it doesn’t give such a huge focus to the “dark side.” Instead, this movie is all about pirating and smuggling, crossing and double-crossing, outlaws and thieves seeking fortunes — it may even be best described as a science-fiction/western flick. That being said, there are still plenty of space and hyperspace scenes to satisfy fans of the original galactic premise.

Alden Ehrenreich had some mighty big shoes to fill, in his role as Solo, but he did well at embodying the same swagger, cynicism and arrogance that Harrison Ford exuded as Solo over 40 years ago. Not a simple task by any means. Ehrenreich could have easily just attempted to mimic Ford’s mannerisms and style of speech but instead chose to emulate the essence of Solo while also adding his own unique charm to the character.

Perhaps the biggest standout in the film is Donald Glover’s take on a young Lando Calrissian. The elegant suavity of his character is completely unrivaled and deserves only the highest praise — perhaps maybe his own movie, too. I know I would certainly be eager to learn more about Lando’s origins, beyond what we are privy to in this film, and his rapport with his co-pilot L3-37 deserves much more screen time.

The film was directed by Ron Howard, who was more than capable of assuming the position at the helm of such a massive franchise film and expertly steering it in the right direction.  The father-son writing team Lawrence and Jonathan Kasdan were behind the script, and set up the film so it takes place before the original trilogy, falling somewhere between Revenge of the Sith and Rogue One.

There are some moments during the movie when you realize this film is playing it pretty safe and offering us a fairly straightforward plot so it doesn’t become overcomplicated or get lost somewhere in the franchise. This is an origin story after all, so it’s easy to rely on the nostalgia factor to ensure audiences enjoy the premise; just show us how Solo met Chewbacca and Lando, and how he first came in contact with the Millennium Falcon. It’s a safe bet that we’ll be satisfied.

Overall, Solo is simple and delightful. The story is told linearly and allows audiences an entertaining and uncomplicated cinematic experience without the added weight of substantial tragedy. The characters are excellent, the settings are familiar, and the thrills are plentiful. Although it doesn’t necessarily reach the same dramatic heights as its predecessors, it’s still a satisfying glimpse into some of Solo’s most pivotal life moments before becoming the reluctant hero we all know and love.

If this is the start to a brand new Star Wars saga, we’re definitely on board. ~Caitlyn Clancey

Deleted scenes – The bonus Blu-ray disc features eight scenes that were cut from the final film, including an extended scene between Solo and Chewbacca’s first meeting when the two weren’t exactly hitting it off right away, and a brief clip of Solo’s tumultuous stint as an Imperial pilot in training.
Solo: The Director and Cast Roundtable – Ron Howard and cast members talk about the production process and share some interesting stories from the set.
Becoming a Droid: L3-37 – The film introduced Phoebe Waller-Bridge as the spunky droid/rights activist L3-37. Take a look at the process of bringing this new character to life, including the use of CGI effects and Waller-Bridge’s performance.
Into the Maelstrom: The Kessel Run – How the infamous hyperspace route known as the Kessel Run was brought to the big screen.
Escape from Corellia – The elaborate chase sequence during Solo and Qi’ra’s daring escape from Corellia is broken down.
Remaking the Millennium Falcon – Take a tour of the Millennium Falcon and learn how this version differs from those seen in the other films.
Kasdan on Kasdan – The father and son writing team talk about what it’s like to work with family and how they developed this origin story for Solo.
Team Chewie – A closer look at the relationship between Solo and Chewbacca and how certain scenes, particularly their first meeting, were shot.
The Train Heist – One of the most elaborate and action-filled sequences in the film is given a closer look at how it all came together.
Scoundrels, Droids, Creatures and Cards – The seedy Fort Ypso lodge, where Solo and Beckett meet up with Lando, is full of interesting characters who get a more detailed look in this feature, as well as the use of dim lighting and the card game, Sabacc, for which the crew came up with actual rules.