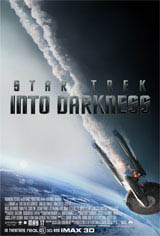 Tribute‘s Bonnie Laufer was at the world premiere of Star Trek Into Darkness in London, where she caught up with the stars on the white carpet.