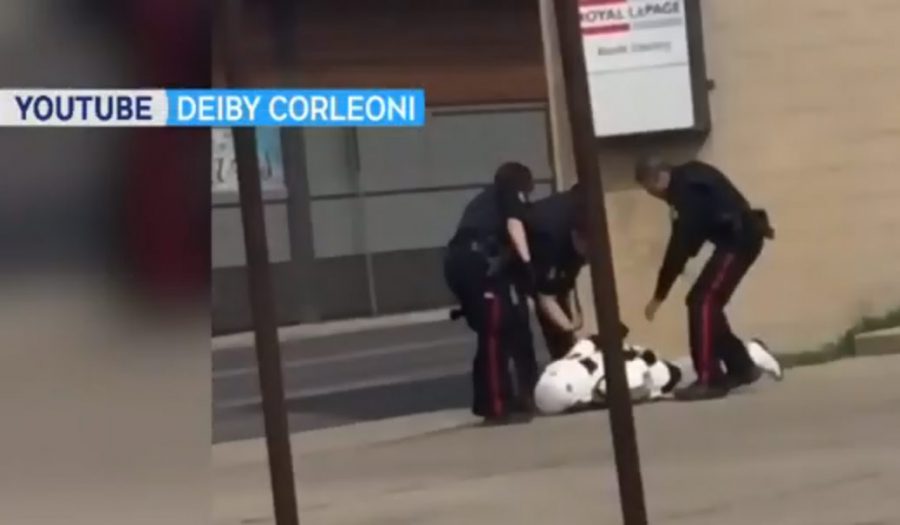 A teenage girl hired to dress up as a Stormtrooper to attract customers to a restaurant for May 4th (Global Star Wars Day) was surrounded by cops and forced to get on the ground because she was carrying a plastic Star Wars gun.

Ashley, a tiny 19-year-old who works for Coco Vanilla Galactic Cantina in Lethbridge, was asked by the owner, Brad Whalen, to dress in the costume and walk back and forth in front of the restaurant carrying a toy blaster. She was quietly doing just that when she was surrounded by police cars with sirens blazing, as police got out of their cars and aimed their weapons at her.

Ashley immediately dropped the plastic gun, but the officers screamed for her to get to her knees and lie on the ground. It took her awhile, as moving in the stiff costume was extremely difficult. She was finally forced to the ground by armed police, hitting her face on the pavement, which caused her nose to bleed.

In a witness video, Ashley can be heard crying, trying to explain in a terrified tone. In the video, the witness tells the cops that it’s a toy gun, but they just ask him to stand back and threaten to arrest him as well.

“Coco Vanilla Galactic Cantina” ran a May the 4th promotion yesterday that included a female employee dressed as an Imperial Stormtrooper marching along the sidewalk at the location. Alberta cops roll up and arrest her in dramatic fashion. Fucking dicks. pic.twitter.com/icyMTj6MIT

“All the signs say ‘Star Wars.’ The music that was playing in the parking lot was Star Wars,” said owner Brad Whalen.

A news release said when officers arrived, the person dropped the weapon but didn’t comply right away with directions to get down on the ground. Whalen disputes that, saying that his employee dropped the weapon right away and put her hands up, but had a hard time hearing because of the stormtrooper helmet and couldn’t get on the ground because the plastic parts of the costume make it difficult to move, other than walking stiffly.

Police Chief Scott Woods has directed an investigation into the officers’ conduct. The employee in the costume was not charged.

Whalen says the incident has affected all his employees, but especially Ashley. He told the media, “Ironically enough, she wasn’t a ‘Star Wars’ fan. I don’t think she will be a ‘Star Wars’ fan … if we had any chance to convert her.”

May 4 is known as Star Wars Day and is popular for the phrase “May the fourth be with you,” a take off on the famous line from the movie, “May the Force be with you.” ~Alexandra Heilbron