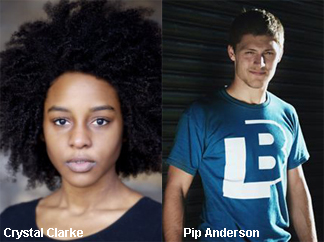 The Force is strong for two young actors recently cast in J.J. Abrams’ Star Wars: Episode VII. American actress Crystal Clarke and British actor/parkour enthusiast Pip Anderson won the parts out of the 37,000 who auditioned at the open casting call and the over 30,000 people who submitted their applications online. The casting news comes after LucasFilm traveled to over 37,000 cities across the U.S. and the United Kingdom. Crystal, who was born in New Jersey, recently graduated from the Royal Conservatoire of Scotland. Currently, she is making her feature debut alongside Pierce Brosnan and William Hurt in The Moon and the Sun.

Pip Anderson was in Jennifer Lopez’s short film Wisin & Yandel, as well as on 2009 to 2010’s MTV’s Ultimate Parkour Challenge. In response to the casting of new and young talent, Kathleen Kennedy (Producer and Lucasfilm president) said, “The Star Wars universe has always been about discovering and nurturing young talent and in casting Episode VII we wanted to remain absolutely faithful to this tradition. We are delighted that so many traveled to see us at the open casting calls and that we have been able to make Crystal and Pip a part of the film.” ~Andrea Hodgins