The Counselor opens the weekend’s releases 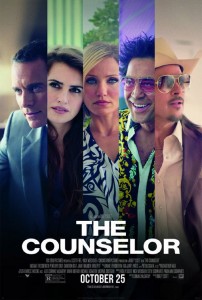 While this weekend isn’t rampant with wide releases, it nonetheless provides a stellar line-up of hotly anticipated films. Arguably the most anticipated is Ridley Scott’s The Counselor. Based on an original screenplay from critically acclaimed writer Cormac McCarthy, the thriller follows a successful lawyer who becomes embroiled in the dark underworld of drug trafficking and features an all-star cast including Michael Fassbender, Penelope Cruz, Cameron Diaz, Javier Bardem, and Brad Pitt. Also releasing today is the R-rated comedy Jackass Presents: Bad Grandpa. The romp stars Johnny Knoxville as the 86-year old Irving Zisman as he embarks on a road trip across America with his grandson Billy. Made in a similar vein to the Jackass films, it features hidden-camera pranks accompanied by narrative segments.

J.C Chandor’s sophomore effort All is Lost also opens this weekend, featuring Robert Redford as a sailor who, in the wake of a crash at sea with a shipping container, must use all of his resources to survive. Randy Moore’s daring fantasy horror Escape from Tomorrow rounds off the weekend’s releases. The narrative film debuted at the Sundance Film Festival and gained attention when it became known parts of the film were shot at Disneyworld without the consent of The Walt Disney Company. The story follows an unemployed father’s battle with sanity after encountering two underage girls on holiday. Starring Roy Abrahamsohn and Elena Schuber, it makes its way to cinemas despite the overwhelming chance that the filmmakers may be sued by Disney, who used guerilla techniques to shoot the film. ~Raj-Kabir Birk