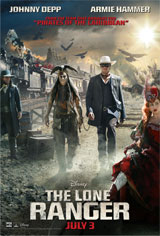 Johnny Depp fans can check out his latest flick alongside The Social Network‘s Armie Hammer in The Lone Ranger, a wild west movie featuring some of the best action scenes this year. Set in 1869, Hammer takes on the lead role of The Lone Ranger, a Texas lawman who is left for dead after a fatal ambush by an outlaw gang led by  the ruthless Butch Cavendish (William Fichtner). As the only remaining Texas Ranger, he teams up with Tonto (Depp), in an adventure to bring back justice to the wild west. But with conspiracy and betrayal in their midst, the vigilante duo gets some help from Red Harrington (Helena Bonham Carter), a brothel madam with a leg made of ivory, during the ultimate showdown between good and evil.

The film is helmed by the Pirates of the Carribean director Gore Verbinski, providing plenty of the action scenes he’s known for, filled with an abundance of stunts and adrenaline-pumping train chases. Tonto’s bizarre and short statements along with the Ranger’s dry, sarcastic humor create hilarious, laugh-out-loud chemistry. But their funny antics aren’t just in character. Depp and Hammer keep it light-hearted in the special blooper reel in the Blu-ray/DVD. Special features also include a deleted scene, a rundown of the film locations, how the epic train scenes were shot and a featurette of the “cowboy boot camp” the actors went through in order to play true cowboys of the old wild west. ~Jennifer Yoo