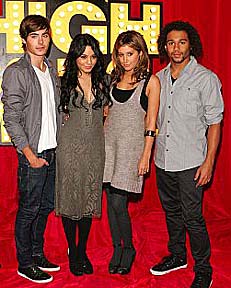 High School Musical 3: Senior Year, starring Zac Efron, debuted in first place at the North American box office, earning $42 million domestically and $82 million worldwide over the weekend. It’s one of the most profitable movies of the decade due to the $13.5 million budget, far less than the average big screen release.  Reviews for the movie were surprisingly positive, considering this is the first of the three films to hit the big screen and the fact that critics are older than the target audience. Another new movie, Saw V, earned $30.5 million dollars domestically, but only $6 million overseas. Max Payne, starring Mark Wahlberg, slipped two notches to third, earning only $7.6 million for a three-week total of $29.6 million. Beverly Hills Chihuahua took in an additional $6.9 million in its fourth weekend, while the cop drama Pride and Glory rounded out the top five with $6.3 million in its first weekend at the box office.