Top movie takes a tumble at this weekend’s box office 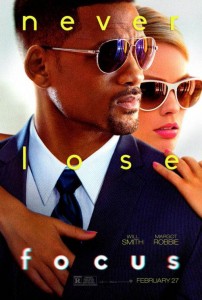 The focus was on a new debut at this weekend’s box office.

Bumping last weekend’s top film, Fifty Shades of Grey, out of the number one spot, was the crime comedy Focus, starring Will Smith as a veteran con artist and Margot Robbie as his attractive young intern. The film earned $19.1 million and is a hit with Tribute readers, holding a 4.5 star rating.

For the third straight week, Kingsman: The Secret Service remained the runner-up at second place. The action thriller earned $11.7 million this time around and currently sits at a 3.6 star rating with Tribute readers.

Also remaining in its previous slot was The SpongeBob Movie: Sponge Out of Water, coming in third for another week. This weekend the family film earned $11.2 million and dropped slightly to 2.9 stars with Tribute readers.