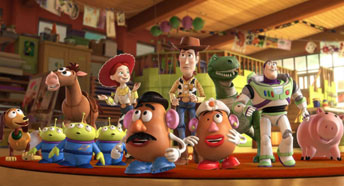 Toy Story 3 remained the No. 1 movie at the box office for the second weekend in a row, earning an additional $59 million (all figures in $U.S.). Tribute viewers rated it 4.3 out of 5 stars. The new comedy Grown Ups, starring Adam Sandler, achieved second place in its debut weekend with a box office take of $41 million and a Tribute Viewer rating of 3.5 out of 5. In third place was Tom Cruise‘s action comedy Knight and Day, earning $20.5 million and a Tribute Viewer rating of 3.5.  The Karate Kid and The A-Team earned $15.4 million and $6 million respectively, rounding out the top five.