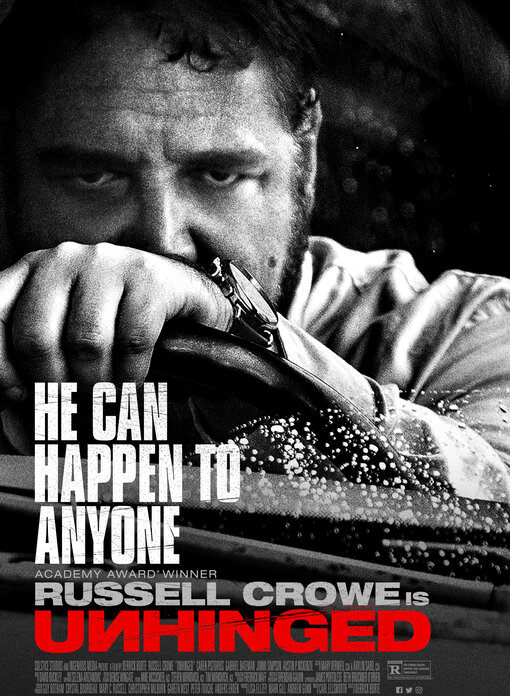 From the moment Unhinged begins, we learn that the character Russell Crowe plays is really stressed out. He doesn’t have a name (he’s referred to as “Man” in the credits), but we find out he’s a divorced man with serious anger issues.

Right after he’s committed a horrific act, the movie shows us scenes of road rage, of people striking out in anger, and discusses how stressed we all are these days, with overpopulation and lack of time, leading to multitasking – even while driving. And this was before the pandemic even began.

Meanwhile, Rachel (Caren Pistorius) is not having a great day. She slept in, and now not only is she late for her first appointment of the day as a freelance hairdresser, but her son Kyle (Gabriel Bateman) will be late for the third time — which means a detention for him.

To make matters worse, she gets a call from her lawyer saying that her estranged husband wants the house where she and Kyle live in the divorce settlement.

When Rachel hits the road in her old station wagon to drop Kyle off at school, she’s already stressed, only to get a call from her first client of the day, who’s angry that she’s late, and fires her.

Then Rachel winds up behind a truck at a stoplight. When it turns green, the truck stays stationary. Frustrated, she finally presses the horn and when it still doesn’t move, just as the light is turning yellow, she veers around him and onto the freeway, only to find she’s stuck in a traffic jam.

The truck soon pulls up beside them. The man (Crowe) asks for an apology. Kyle thinks his mom should apologize, but she refuses. She says she’s done nothing wrong. The man then vows he will make sure she understands what a truly bad day is.

From there, this revenge thriller moves a mile a minute, with barely a chance for Rachel — or the audience — to catch their collective breath.

This is one of the first new Hollywood movies to hit theaters — and one that many have been waiting to finally see.

Russell Crowe makes an excellent bad guy. His cold, deadly rage is terrifying and palpable. Crowe’s fellow New Zealander, Caren Pistorius, brings a complexity to her role that makes her fascinating to watch. She could have played this as a terrified victim – certainly what happens to her is horrifying and would make anyone weak at the knees. But she carries herself with a quiet strength that belies her young age. She plays Rachel as a woman of strength, despite everything that she’s going through.

Like the poster says, this could happen to anyone — it will likely make you think twice before becoming impatient with another driver and/or leaning on your horn.

Unhinged is a fast-paced, nail-biting thriller and a perfect film to bring audiences back to theaters. It opens in select Canadian cinemas today.

Though it features a familiar premise with its sci-fi setting, Jiu Jitsu has more than enough surprises and offers strong bang-for-your-buck entertainment.