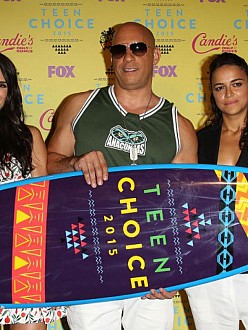 Vin Diesel paid a glowing tribute to Paul Walker at the 2015 Teen Choice Awards on Sunday night as the late star won the Choice Movie Actor award in the Action/Adventure category.

Walker, who died in November 2013 in a car accident, beat out competition from Ansel Elgort, Dylan O’Brien, Taylor Lautner,  Theo James and Vin to claim the award for his performance in Furious 7.

Vin paid tribute to his friend when he took the stage to accept the surfboard for Choice Movie: Action/Adventure alongside co-stars Michelle Rodriguez, Chris “Ludacris” Bridges and Jordana Brewster, saying: ”I can’t stand here and be rewarded like this without talking about somebody very, very, very important to us. One of the best blessings in our lives was the fact that we had the opportunity to call Pablo our brother. Paul Walker is here in spirit with us.”

Meanwhile, the biggest winners on the night were British band One Direction, which won eight awards in total, including Male Music Group, Choice Summer Music Group, and Choice Selfie Takers.

However, the band – which now consists of Harry Styles, Liam Payne, Niall Horan and Louis Tomlinson – were not at the event at the Galen Centre in Los Angeles in person and were instead forced to accept their awards via video link.

Chloe Grace Moretz – If I Stay

Vin Diesel’s stunt double was seriously injured after a 30 foot fall on set, and was placed in an induced coma on Monday. Filming was put on pause that same day.