ALL THEATRES ARE CLOSED UNTIL FURTHER NOTICE, DUE TO COVID-19.
Award season > Vin Diesel pays tribute to Paul Walker at People’s Choice Awards 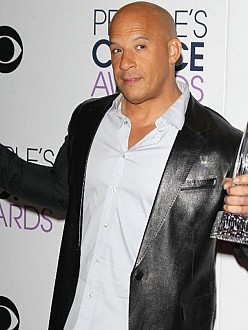 The Hollywood heartthrob took to the stage at the prestigious ceremony to pick up the prize for Favorite Movie and Favorite Action Movie for Furious 7.

But the loss of former co-star Paul Walker, who died in November 2013, is something Vin is clearly still coming to terms with.

Struggling to control his emotions, Vin said: ”They said to make this short and sweet, so I will try to make this short and sweet. It was a labor of love. My only message to you is you’d be amazed what you can do with love. You’d be amazed at how powerful a force that is. When we didn’t want to come back to filming when the tragedy was too heavy, it was the love of everyone combined that saw us through to the end.”

Vin then continued to pay tribute to Paul by singing a few lines of Wiz Khalifa and Charlie Puth’s See You Again: ”It’s been a long day without you, my friend, and I’ll tell you all about it when I see you again.”

The awards weren’t without their surprises either. Johnny Depp stunned fans when he took to the stage to collect his prize for Favorite Dramatic Movie Actor, having not been expected to attend.

During his acceptance speech, Johnny thanked his fans for standing by him throughout his eclectic career.

Drama was also caused by a stage crasher, who interrupted The Talk ladies when they were picking up their award for Favorite Daytime TV Hosting Team.

But Sharon Osbourne was less than impressed by the intruder, kicking him and giving him the finger as co-star Sheryl Underwood screamed: ”You ain’t gonna pull no Steve Harvey up here, no sir, no sir. Security! Back to your speech, girl.”

Favorite Song: ‘What Do You Mean?’, Justin Bieber