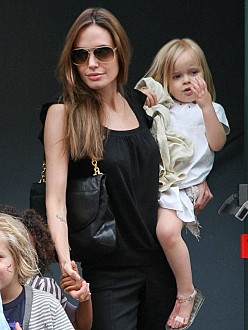 Vivienne Jolie-Pitt is earning $3,000-a-week on her first acting job. The four-year-old tot - the youngest daughter of Brad Pitt and Angelina Jolie - is starring alongside her mother in her new movie Maleficent and according to her contract, she is being paid an impressive amount for a minor. Gossip website TMZ also claims Vivienne - who has a twin brother, Knox - is being given $60-a-day in expenses. As well as Vivienne - who will play a younger version of Elle Fanning's character Princess Aurora in the live-action film - starring in the movie, her siblings Pax, nine, and eight-year-old Zahara have also won roles. A source previously said: "They have smaller parts." But the couple's other daughter Shiloh - who previously appeared alongside her father in acclaimed 2008 movie The Curious Case of Benjamin Button - is said to have turned down an opportunity to be in the new Disney film. The source added: "Shiloh was supposed to be in it, too, but she was bored and not in the mood during the day her part was supposed to happen, so she ended up not being in the film."